With Lucien Castaing-Taylor in person! 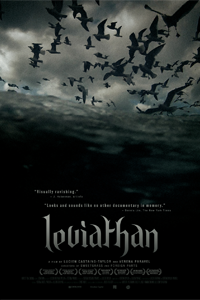 Lucien Castaing-Taylor will present a special screening of his and Véréna Paravel’s acclaimed 2012 film Leviathan, Thursday, April 24th at 7:30 PM in Muenzinger.

“Leviathan...is perhaps the most radical work yet to emerge... and certainly the one that goes furthest in striving for an immersive cinematic experience." Dennis Lim of the New York Times

There are moments in "Leviathan" so breathtaking that it's easy to forget they're also familiar. Documentarians Vérena Paravel and Lucien Castain-Taylor follow a pair of fishing vessels off the coast of Massachusetts from nearly every imaginable angle as well as a few impossible ones: Captured on small digital cameras fixed to fishermen helmets, tossed beneath the waves and strewn across the deck among the dead-eyed haul, the barrage of visuals populating "Leviathan" contain a routinely dissociative effect. The dialogue is sparse and distant, drowned out by hulking machinery, wind and water. The movie could take place on another planet; instead, it peers at this one from a jarring and entirely fresh point of view.

A documentary dream team for enthusiasts of experimental approaches to the form, "Leviathan" recalls the strengths of both directors' previous efforts. Castain-Taylor's pensive 2003 look at sheep herders, "Sweetgrass," similarly foregrounded the inextricable bond between humanity and nature, while Paravel turned the grimy discomfort of a Queens junkyard into a marvelously engaging paean to people living at the edges of society. The anonymous fishermen regularly glimpsed throughout "Leviathan" contain a primal dimension drawn out by the way they become almost immediately subsumed by the surrounding environment.

The movie opens with a quote from Job about the unflappable power of the leviathan (the title is later referenced with a sampling of a song by heavy metal rockers Mastadon). But the filmmakers eschew biblical aspirations for raw, cosmic power rendered especially involving by disorientation. Both during the black of night, when the boat forms a piercing figure in the black frame, and in the daylight glow, the camera rarely ever stops moving: From the earliest shots, it constantly shifts from the loud interiors of the boat to view the dark abyss below, resting on blotches of white foam and endowing them with abstract power.

There's little time to adjust before the first of many horrific plunges into the water, where the adventurous, free-roaming lens peers upward before careening to the surface for air. The angles and framing "choices" are as much beholden to a natural ebb and flow as the ocean itself, but the filmmakers thread the images together with brilliant finesse, so that it's often difficult to spot the abrupt editing choices; even more frequently, the montage builds to such an absorbing effect that it's impossible to break the spell and look for them.

Having established the POV of the fishermen, "Leviathan" shifts to the semi-static view of the fish. As cameras lie among the detritus and observe its chorus of vacant stares, the cycle of the fishermen's work is echoed by the rhythmic sounds of chopping and the thud of animal parts hitting the hull as scales glitter among pools of blood.

Even as its perspective grows increasingly alien, 'Leviathan' is full of life.

Despite the overload of sights and sounds, "Leviathan" adheres to a remarkably cogent aesthetic filled with innumerable painterly touches, from the red and blue gloves of the fishermen to the dark yellows of the ship interiors. Flitting across the screen at a relentless pace, the ongoing motion gives the impression of the late Stan Brakhage's dizzying stylings in aquatic terms.

However, the stunt work on display roots the continuing sequence that forms the entire movie in a precise world. "Leviathan" resembles nothing like the existing format for nature documentaries, but it does point to a different approach to it. Generally speaking, the genre is predicated on distance between the viewer and subject. "Leviathan," on the other hand, delves into the thick of it, the camera merging with subjects living and dead, fashioning the natural world into the ultimate expressionistic accomplishment.

Even as its perspective grows increasingly alien, "Leviathan" is full of life. The most striking moment involves a flock of seagulls seen upside down against an empty sky, the digital image morphing them into violent brushstrokes on a blank canvas. The stunning black and white tableaux frees the gulls from a familiar reality while poeticizing their natural buoyancy.

The fishermen are also folded into this reverse objectification. In the lengthiest scene, a middle-aged man rests in the ship interior, neatly framed in a shot that drags on for minutes until he eventually falls asleep. Viewed in his natural habitat, he takes on the same primitive qualities applied to the cold-blooded vertebrae lining the ship.

Without rescinding its atmosphere, "Leviathan" finally brings up its credits, which contain a tribute to vessels lost off the Bedford Coast. Even then, however, it avoids hitting an elegiac note. While ominous, the movie maintains a life-affirming message, celebrating an ancient ritual by plummeting its lyrical depths and staying there.