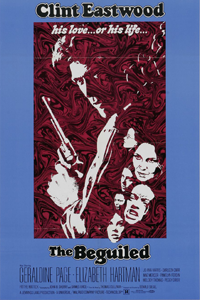 Don Siegel directs Clint Eastwood in the third of their five films together. It's perhaps their most atypical and most psychologically fascinating, showing Eastwood as more of a sexual being than most of his other, iconic films ever did.

During the Civil War, Union corporal John McBurney (Eastwood) is wounded. Young Amy (Pamelyn Ferdin) finds him in the woods and drags him back to her home, a strict all-girls school, plunked smack dab in the middle of Confederate territory. The women are all instantly entranced.

The virginal teacher Edwina (Elizabeth Hartman) falls in love with him, and the sensual teen Carol (Jo Ann Harris) wants to sleep with him. Headmistress Martha Farnsworth (Geraldine Page) keeps a wary -- but equally fascinated -- eye on him.

At the film's midpoint, Siegel turns things into a near-horror film, with the promise of sex suddenly backfiring and morphing into violence (this is war, after all). Siegel started his career as a maker of "montages" for Warner Bros. pictures in the 1940s (including Casablanca) and he cooks up a whopper here, psychologically connecting and twisting the sex and violence. He uses canny flashbacks to illustrate the true nature of these liars and bluffers. He also brilliantly uses brightness and darkness, sometimes connected by the slats in a window, to highlight both sides of the film's physicality. And the insidiously effective music score by Lalo Schifrin does the same.

Miss Page was one of Eastwood's worthiest female co-stars; she had four Oscar nominations at this point and would go on to earn four more, plus one Oscar.