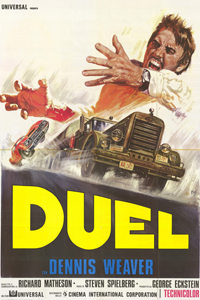 Made for ABC-TV, Steven Spielberg's first solo directing credit is an exquisite piece of streamlined suspense and action that clearly demonstrates that the 24-year-old filmmaker was already in full control of his vision.

A largely non-verbal narrative follows a milquetoast everyman (Dennis Weaver) on a business trip that draws him out of the comfortable suburbs and into the barren desert. Still smarting from a fight with his wife--in which she complained he wasn't assertive enough--Mann cuts in front of a diesel truck. Several miles later the vengeful truck reappears, horn blaring, to terrorize the lone motorist. The big rig tries to run Mann off the road, push him into an oncoming train, and crush him when he frantically tries to get help at a roadside tourist trap.

Finally, his battered family sedan overheating, Mann turns onto a butte and aims the car directly at the waiting truck.

The truck, a huge, dark, exhaust-belching juggernaut, takes on a malevolent personality all its own and compares well with such elemental Spielberg beasts as the shark in JAWS and the T-Rex in JURASSIC PARK, though Weaver also deserves kudos for his virtual one-man-show as the reluctant David pitted against a mechanized Goliath.

Steven Spielberg was directing TV episodes for Universal when a contact in the mailroom showed him Richard Matheson's script. Spielberg campaigned for and won the directing assignment, completing the project for $300,000. Like many an American TV movie, DUEL went into theaters in Europe, but unlike other recycled television product, it became a major hit.

DUEL won the Cariddi D'Oro for its debuting director at the Taormina Film Festial in Rome and a Grand Prize from the Festival du Cinema Fantastique in France, in addition to earning $9 million at the box office and marking a milestone in Steven Spielberg's fledgling career. Following his smash with E.T. THE EXTRATERRESTRIAL in 1982, Universal re-released DUEL in selected American cinemas.