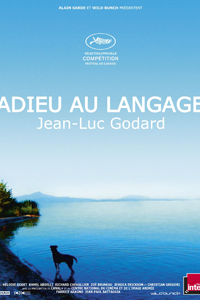 This screening takes place in Chem-140, next to the University Memorial Center. We've prepared a flyer (click here to open) for those who may not be sure how to get to Chem 140.

For me, at Cannes 2014, there was Jean-Luc Godard’s Adieu au langage and then there was everything else. Godard didn’t attend, instead sending a video letter to festival toppers Gilles Jacob (who has officially stepped down) and Thierry Frémaux, who now runs the whole shebang. Godard explained that he was in a “different place,” a phrase that should be read, like every minute of Adieu au langage, both literally and metaphorically. In a more revealing interview recorded in Paris shortly before the festival (and viewable on YouTube) he explained that in the early Sixties, Cannes had been the place to be with his second family—directors and cinephiles—although that had quickly proven to be no happier than the first.

There was still a strong strain of cinephilia when I began attending the festival nearly 20 years ago. But this year, it was all but obliterated by what I can only describe as mass movie bulimia, the goal being to scarf down as many films as possible and vomit up undigested opinions in tweets and blog posts, even before the lights have come up in the theater, or spew them onto captive audiences in the pass-holder queues, where one stands, unless one possesses one of the higher- priority passes, for anywhere between 30 minutes to an hour and a half, in some cases, depending on the popularity of the movie and the size of the theater in which it’s screening. Being hotheaded and opinionated, I have occasionally gone on the attack within earshot of dozens, usually in defense of a movie I believe is being stupidly decimated or one that I think is ridiculously overvalued. This year, not wanting to add to the insufferable noise, I limited myself to a contemptuously curled lip or half-stifled ironic laugh. Which is hardly the way to communicate with the few cinephile peers one has left, many of whom have already written cogently and even passionately about the films of Cannes 2014.

Still, I think Godard would have been pleased, not only by the cheer of “Godard forever” that rose from the packed Lumière Theater as the lights dimmed for the premiere of his first 3-D feature, but also by the spontaneous applause that erupted mid-movie, after a mindboggling, eyeball-dislocating, narratively profound sequence that involves the superimposition of two 3-D images that begin as one, go their separate ways, and reunite at the end. Or at least after one viewing, that’s what I think happens. Having upended the rules of film language in Breathless, Godard does it anew here, 3-D having more interesting possibilities for depicting the “I” of the self in relation to the “I” of the other (or the “I” of “I think” which is not the same as the “I” of “I am,” to paraphrase Godard quoting philosopher Emmanuel Levinas) than the two-shot or the shot/ countershot does. So it’s goodbye to all that and hello to the transformation of the relationships between on- and off-screen space, image and sound, and, of course, flatness and depth. No surprise, Godard isn’t interested in making us think we can touch the fingers that seem to reach out from the surface of the screen. There are many things in Adieu au langage that are familiarly Godardian: it’s divided into two parts, the second repeating the first but with variation, and both parts are subdivided into “Nature” and “Metaphor”—although these sections are not con- secutive but intermingled. There is the expected adulterous heterosexual couple, lounging around naked in front of a TV that sometimes shows black-and-white movies with passionate but decorously dressed lovers and sometimes the atrocities that humanity has committed and that film has captured.

Godard’s 3-D cameras are jury-rigged and/or low-tech but they yield images of great variety and beauty. Indeed this late (but not final) film might be his most beautiful, Mozartian in its lightness, and unrestrained in communicating feelings about love. There is a third term in the relationship of the couple: he is named Roxy and is played by Roxy Miéville, suggesting that the actor is a member of the family of Godard’s partner, Anne-Marie Miéville. Roxy is a dog, an exceptionally free spirit with serious brown eyes and a dark brown coat with gold and white markings that can look like a blur of autumn leaves when he runs. We know that dogs are scene-stealers, but Godard’s pleasure in immortalizing the enchanting way that Roxy turns his head and the mystery of his eyes is more naked than it ever was with any of the actresses he transformed into stars. Adieu au langage, which ends with a dog’s bark and a child’s cries, is a masterpiece, a film attuned to a future that likely will not come to pass.