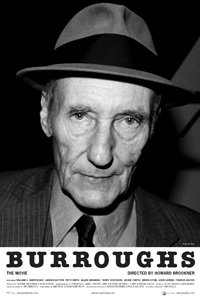 By respectfully minding the gap between Naked Lunch author William S. Burroughs's experimental fiction and his real-life passions and traumas, biographical documentary Burroughs -- shot in 1983 with its subject's participation -- paints the artist as an elusive persona.

Director Howard Brookner defines Burroughs's fiction by its autobiographical elements and elliptical prose style, and establishes Burroughs's slippery character through his interview subjects' impressionistic, off-the-cuff commentary. Fragmentary asides, like the scene where journalist Lucien Carr regales poet Allen Ginsberg with his impression of Burroughs as a womanizing college student — " 'There's a thunder in my chest,' he'd say, and all the women fell to the floor" — are given as much weight as sequences where Burroughs tentatively explains the philosophy behind his Dada-esque "cut-up" style.

Likewise, the major players and events in Burroughs's life are not introduced or situated within a linear biographical narrative. In one scene, Burroughs matter-of-factly explains that he developed an interest in opium because he'd heard it gave users "strange dreams." Soon after that, Burroughs and Ginsberg hazily speculate on the circumstances that led Burroughs to accidentally shoot his wife Joan Vollmer in a game of William Tell. Ginsberg speculates that it was an assisted suicide, while Burroughs grumbles unintelligibly about a "malevolent spirit" that haunted him.

Burroughs's free-associative style allows viewers to enjoy tantalizing interview footage — like the scenes where Burroughs rambles about Wittgenstein's conception of human existence as a "pre-recording" — without necessarily understanding what he's saying. Come for the bawdy anecdotes, stay for the defiantly soundbite-proof rambling.