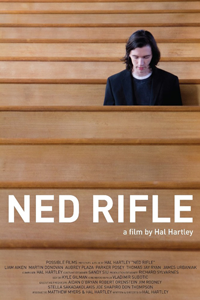 Hal Hartley’s first proper feature in 8 years (Grade: B+) finds him returning for the second and presumably final time to the characters of Henry Fool, the sprawling 1997 tragicomedy that’s the closest thing the indie stalwart has produced to a magnum opus. Like its predecessor, the global paranoia send-up Fay Grim, Ned Rifle is centered on one character’s search for Henry, the trickster, conman, and self-styled raconteur played by Thomas Jay Ryan; this time, it’s his son, Ned (Liam Aiken, who’s been playing the role since he was 6), a teenage born-again Christian who is convinced that it’s his duty to kill his father.

The movie, which is less formally outrageous than any of Hartley’s 2000s work, is undoubtedly designed to please the writer-director’s fans, with the returning cast—Ryan, Aiken, James Urbaniak, Parker Posey—joined by Hartley regulars Martin Donovan, Bill Sage, and Robert John Burke. (Meanwhile, Aubrey Plaza fills in the big-eyed gamine role previously occupied by Adrienne Shelly, Elina Löwensohn, and Sarah Polley.) Sure, it’s all shtick, but the thing is the shtick is too peculiar and personal—a writerly non-realism built on choreographed movement around a stationary camera and a variety of motifs and devices borrowed from ’60s and ’80s Godard—to ever register as hackneyed. Repeating himself without ever lapsing into self-parody, Hartley has made a movie that will seem awfully familiar to his fans, but which also looks, sounds, and moves like nothing else on the current American indie landscape.