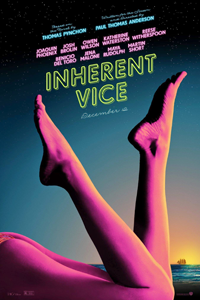 Paul Thomas Anderson, cinema’s bard of California angst, has made his first comedy with “Inherent Vice.” The adaptation of Thomas Pynchon’s shaggy everything novel about a stoner private investigator in 1970 L.A. has more laughs packed into it than all of Anderson’s previous features combined (and that includes his whiny Adam Sandler film “Punch Drunk Love”).

As with most of Anderson’s movies, there’s a lot more than giggles going on here. There’s perfect period recreation, angry satire about the fading of the hippie era into our far more materialistic and oppressive times, a lament for several characters’ simpler lives and lost loves — they’re all thematically bubbling under, and sometimes up onto, D.P. Robert Elswit’s Expressionist-inflected, ‘70s flat lit surfaces.

But the only way to really enjoy “Vice” is as a big, baked goof. The actors sure seem to be. Joaquin Phoenix, so feral in Anderson’s “The Master,” is Pynchon’s hairiest of heroes, Doc Sportello (his office is actually at a medical practice). When not zoning out or getting paranoid in his beachside cottage, the gumshoe goes determinedly on a mission to find out something about what his ex-California dreamgirlfriend (Katherine Waterston as a flower child-turned-blue dahlia) has gotten herself into.

More magnificent than ever, Phoenix runs through the full gamut of human emotions with all the right layers of intoxication for any given situation. Phoenix never forgets to be hilarious, even at Doc’s most poignant and stressed moments.

Equally as good is Josh Brolin’s hard-boiled LAPD detective Christian “Bigfoot” Bjornsen. A hippie-hating rights abuser with a SAG card (he was the third cop on the left in that episode of “Adam-12”), Bigfoot is also scary smart and a walking cesspool of clashing psychological contradictions. Plus, Pynchon and Anderson gave him the best lines. (I can’t remember seeing Brolin having this much fun before.)

Bigfoot is always threatening to destroy Doc, even when they have to work together to unravel a convoluted plot involving real estate, Nazi bikers, undercover musicians, dentists who may be criminal masterminds and, that Cal Noir staple, ruthless rich bastards whose secret agendas screw everyone else.

Plotwise, this thing gets so lost in its own metastasizing complications and parade of new characters that it often comes crashing down in the second and third acts. (There is a reason no Pynchon novel has made it to the screen previously.) But Anderson and company always come back with an amusing new high whether it be a great turn of phrase, astounding turn by an actor or some precise example of how it all turned into such a bummer.

But don’t take that last observation wrong. “Inherent Vice” is often an uproarious trip. It’s like a “Big Lebowski” with twice the brainpower on more — and better — drugs.