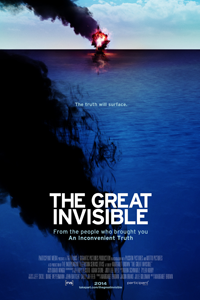 “The Great Invisible,” Margaret Brown’s masterful documentary, puts the spill back in the spotlight to examine how it happened and why outrage — and a good dose of soul-searching — is still in order.

There are a number of memorable characters in the movie, but one of the most tragic is Doug Brown (no relation to Margaret), who was the oil rig’s chief engineer. Footage he shot before the accident appears in the film alongside interviews with him since the spill, and the change in his voice is dramatic. Pre-explosion, he’s chatty and excited, giving friends and family back home a tour of the rig’s control room. Now every word he utters is weighed by sadness. When he talks about how exceptional his co-workers were, there’s an emptiness where pride used to be. His verve appears to have disappeared somewhere amid the astounding cocktail of prescription drugs he takes for pain both physical and emotional.

Other portraits include the citizens of struggling towns along the Gulf where fishermen and oyster shuckers depend on the dwindling population of seafood. We follow along as a delightful volunteer named Roosevelt delivers boxes of food to people who no longer have a way to support themselves. And we hear straight talk in a thick Massachusetts accent from Kenneth Feinberg, the lawyer who was put in charge of the BP Deepwater Horizon Disaster Victim Compensation Fund.

It would be easy to pile blame on BP; oil companies are easy targets. But Margaret Brown delves deeper, beyond the safety measures that the company disregarded, and explores the roots of the problem, including our own dependence on oil. She also highlights the continued lack of oversight. After the spill, members of Congress had tough questions for all of the big oil companies, and President Obama put a moratorium on offshore drilling for a time. But the federal government has done nothing to ensure that the proliferating number of offshore oil rigs are any safer than the one that exploded in 2010.

Brown seamlessly blends the emotional, intimate stories of people with bigger pictures, using the explosion as the starting point for a ripple effect that just keeps growing. And she does it all with some exquisite footage. She manages to turn Doug Brown’s recollection of the explosion into a visceral experience, quick-cutting images we’ve already seen in the movie as if our lives are flashing before us.

She also has a knack for capturing nature. The film opens with close-ups of flora and fauna set to the sound of water gently splashing. It’s a transporting and a haunting scene, as Brown shows us how tenuous our peace can be.