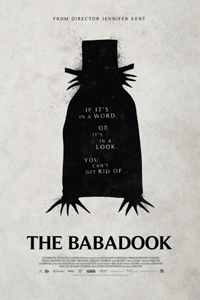 We will be giving out one Babadook Popup Book (value $80) at each show! Write your own original creepy children's rhyme. We'll read them aloud and give the book to the audience favorite.

In the running with Boyhood as my favorite movie of 2014 is another work that turns on the challenges of parenting. This one is a tad more insane. It’s Jennifer Kent’s phenomenally scary Australian chiller The Babadook.

The film centers on a widowed mother, Amelia (Essie Davis), her fragile seven-year-old son, Sam (Noah Wiseman), and a demon out of a twisted bedtime story—literally out of it, since the thing announces its presence in a rhyming, black-and-white pop-up book that appears on the boy’s shelf. It’s called Mister Babadook, and the monster in its pages has a black undertaker’s coat, a top hat, a pasty white face, and elongated, talon-like fingers. The book says that once the Babadook comes, you can’t get rid of him. You can’t deny him, either—denying him makes him stronger. “You start to change when I get in/The Babadook growing under your skin...”

But as eerie as he is—especially when melting out of the shadows—there’s something generic about the Babadook. He’s as nonspecific as his gobbledygook name. It doesn’t take long to realize that Kent isn’t terribly interested in the Babadook as anything but the manifestation of a psyche in crisis. A mother’s psyche. A mother whose son is more and more difficult to manage, whose grief over her dead husband (who died in a crash en route to the hospital while she was in labor) won’t lift, and whose world seems to be contracting by the day. She loves this boy but his existence is eating her alive. But she loves him. But his existence is eating her alive. But... Any parent who has ever been pushed to the brink and heard an alien voice coming out of him or her—a voice that sounds like it’s from the pit of hell—will understand who and what the Babadook is.

The greatest horror stories have little to do with bogeymen from hell and everything to do with bogeymen from inside us—which is why Amelia can be the heroine and the villain, and why the movie, under the surface, is essentially an epic struggle within the mind of a single human being. But let’s not go below that surface just yet. What’s on top is too marvelous: oodles of ghoulish images that feel as if they’ve leapt from the hearts of horror and fantasy buffs. The Expressionism is subtle, the look just realistic enough that you could be sitting on a sofa leafing in wonder through a coffee table book on old suburban houses when—SOMETHING POPS OUT! Kent can freeze your bones while making you laugh out loud at shifts in lighting and sudden, distant perspectives—say, down the hall and up the stairs at the mother splayed out in a ragged easy chair before a TV that’s like her unconscious, babbling.

This is not a film of splashy, sensationalistic effects: The magic is rough, primitive, like Sam’s when he plays in the basement with a cape and wand. Near the peak of Amelia’s madness, her TV screen swims with images of dancing devils and their ilk from the films of Georges Melies—in whose work our friend the Babadook suddenly appears. Reality is as elastic as cinema. The bad juju—it makes lights flicker, filaments crackle—emanates from the ever more bedraggled mother. What’s real is what’s in her head.

Essie Davis is known for her stage work in the U.K. and Australia, and on the basis of The Babadook she could be a major actress. She keeps her wide face subtly tilted, as if Amelia can’t find her center of gravity; every move suggests she’s unmoored, bereft. Her eyes are dark sockets. Her blonde hair is a snarl—it can’t be smoothed. The movie’s editing (by Simon Njoo) is keyed to Amelia’s edginess; the cuts come either a beat earlier than you expect or a beat later, so the audience—like Amelia—can never rest. And the child is always always always there. Noah Wiseman has huge eyes on his little head and big teeth in his little mouth—it’s a face that screams, “I need! I need! I need!” It’s no wonder that the Babadook finds a home inside Amelia.

The last section of The Babadook is an exorcism movie, but different in thrust from The Exorcist, The Conjuring, and other “religious” films in which a male authority (often from the Church) arrives to expel the demon that has descended on a weak family. The Church would be powerless here because this demon can’t be exorcised by prayers and holy water. It can’t be exorcised period, especially by some patriarchal figure looking down unsympathetically from on high. Kent is using the traditionally black-and-white horror genre to show us a new shade of gray. The Babadook, she says, will always be there. It can’t be killed. It can’t be denied. It’s inside some of the best mothers alive—the ones who have not enough money and too many responsibilities, who have a monstrously difficult time reconciling their need for pleasure and grown-up companionship with the demands of a child (or two, or three...). What do you do with a Babadook?

This is Kent’s first feature—an astonishing debut. Not perfect, though. A scene that features Amelia’s wealthy sister and her wealthy friends is cartoonish. Once Amelia and Sam are alone in their house, the structure becomes monotonous—a symptom of most “descent into madness” films, among them Repulsion and The Shining. It could be argued that the metaphor at the heart of The Babadook is too close to the surface and the film too obviously a parable of motherhood. But I didn’t mind that “obviousness.” Anything that makes a parent want to destroy a child is so irrationally terrifying that naming and giving it a top hat doesn’t diminish the horror. It does, however, give us a new way to ease the stress of family life: “Don’t bother Mommy now, kids. She’s with the Babadook.”