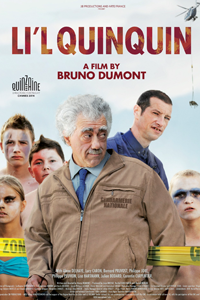 Tonight's show is 3 hours and 20 minutes long, but you don't have to watch it all in one night. You can use your ticket to come back for any of the other screenings of the same movie.

What in the what? Bruno Dumont, France’s chief purveyor of grim, grotesque, occasionally brilliant angst, is back with a new movie, and it is quite possibly one of the strangest things I’ve ever seen. Can we call it a movie? It’s actually a miniseries for French TV, made up of four episodes totaling 197 minutes.

Li’l Quinquin is Dumont’s first comedy — though the operative word there is still Dumont, not comedy. The story, set in a rural community in Northern France, begins with the discovery of a woman’s body chopped up and inserted into a cow. That’s not a particularly funny situation, but the absurdism with which the director presents it — the dead cow being raised by helicopter, in Fellini-esque fashion, while the vaguely incompetent local cops try to deal with the situation — lends the whole thing an air of droll, detached amusement. The landscape here — with farmland for as far as the eye can see, and empty, gray beaches — feels like it could contain any number of existential horrors, but there’s no real sense of menace here. The characters peopling Dumont’s tale hover somewhere between goofy and broken.

The chief investigator is Captain Van der Weyden (Bernard Pruvost), whose vaguely Clouseau-like behavior is exacerbated by a constant, pronounced facial tic; his quiet lieutenant, Carpentier (Philippe Jore), has an angular face and a mouth that looks like it’s been punched a few too many times. Many of the actors in the film seem to sport some type of disability or deformity. Some seem mentally troubled as well. Meanwhile, most of the story is seen through the eyes of Li’l Quinquin (Alane Delhaye), a 10-year-old local kid who spends his time searching the countryside for tunnels and other vestiges of the war, tenderly hanging out with his stone-faced girlfriend (Lucy Caron), setting off firecrackers, and throwing racist epithets at the children of African and Middle Eastern immigrants working in the area. We’re never quite sure what to make of the boy; he seems to be very much a product of his surroundings, but he also seems to regard most of the world with unsmiling contempt.

Dumont has always liked to cast nonprofessionals, favoring odd behavior and appearances over movie-star looks or even acting ability. He likes to draw attention to these faces, and he likes to unnerve us; I suspect that he dreads the idea that we might settle into one of his narratives and stop confronting and interrogating his images. I think he also finds in these figures and their imperfections some semblance of God’s grace, but the spiritual aspect of Dumont’s filmography has never quite resonated for me.

What works, though, is the unsettling nature of the world he presents. Early on in Li’l Quinquin, a funeral service for that first dead woman soon goes off the rails, thanks to an overzealous and incompetent church organist and some shenanigans with a microphone. The scene goes on and on, as the local, buffoonish religious officials giggle and seemingly break character, and you begin to wonder if some of the actors we’re watching may actually be mentally handicapped. The scene is sad, then hilarious, then tedious, then bizarre, then disturbing. The more you watch it, the less you know what to think.

The same could be said for Li’l Quinquin itself, which starts off like it might be France’s answer to Twin Peaks, then begins to feel like Robert Bresson was asked to make True Detective with the cast of Freaks. That sounds insensitive, but it’s hard to pin down just exactly what Dumont wants us to think here. Is there something exploitative about the way he presents these people onscreen? We’re not always laughing with them, if in fact we’re laughing at all. As Li’l Quinquin seesaws between the horrific and the ridiculous, between the playful and profound, between control and chaos, we may find ourselves both frustrated and riveted. Something tells me Bruno Dumont wouldn’t want it any other way.