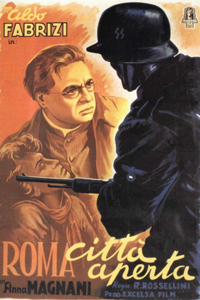 Though told with more melodramatic flair than the other films that would form this trilogy and starring some well-known actors—Aldo Fabrizi as a priest helping the partisan cause and Anna Magnani in her breakthrough role as the fiancée of a resistance member—ROME OPEN CITY is a shockingly authentic experience, conceived and directed amid the ruin of World War II, with immediacy in every frame.