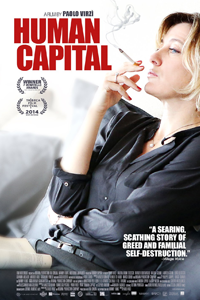 Based on Stephen Amidon’s novel set in moneyed Connecticut, Human Capital smoothly relocates to Italy’s wealthy north in an engrossing if anxiety-provoking tale about two families whose destinies are tied together by a road accident. Though director Paolo Virzi (who is also the director of the Turin Film Festival) is best known for intelligent comedies like his award-winning The First Beautiful Thing, there is very little to laugh about in this anguishing thriller set in a downward-spiraling economy. A top-flight cast gives the character-driven drama depth and conviction and the Italo-French coprod has gotten off to a strong start locally, despite its underlying grimness. It will come out in France next month and it should be on festival radar.

The term “human capital” is legalese that designates an accident victim’s net worth in compensation claims. Here it aptly defines the Bernaschi and Ossola families, the first elegant capitalists and the second struggling middle-classers. Dino Ossola (Fabrizio Bentivoglio, sporting a northern accent and impossibly bad hair) is an embarrassingly gauche social climber who mortgages the house to buy into the Bernaschi family hedge fund, while his wife Roberta (Valeria Golino) is pregnant with twins. Serena (Matilde Gioli), his daughter by a first marriage, attends the same swanky prep school as the Bernaschi’s lunkish son Massimiliano (Guglielmo Pinelli) and the two are dating. Dino's eyes are glued to the illusion of wealth as pure happiness.