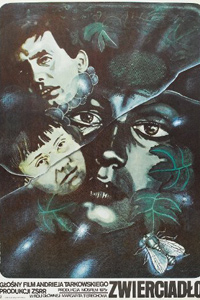 Andrei Tarkovsky, the acclaimed master of Soviet cinema, takes a moving and personal turn with this striking meditation on life in Russia during the bleak days of WWII. THE MIRROR is not just the display of a film director at the peak of his unique powers. As an homage to the innocence of childhood, it tells an enigmatic tale that is both gripping and horrifying. Tarkovsky uses his own coming-of-age experiences, himself "mirror"-ed, to convey the mood and action that dominated a country ravaged by war. Through a fascinating two-tiered time frame, the director blends his own harsh childhood with an adult life that is troubled and broken. Powerful images (a mother faced with political terror, a divorcing couple's quarrel) are underscored by Tarkovsky's masterful manipulation of film stocks and recorded sound. THE MIRROR becomes a stream-of-consciousness, nostalgic visions of childhood mixed with slow-motion dream sequences and stark WWII newsreels. Tarkovsky's THE MIRROR is ultimately as much a window through the filmmaker's gaze as it is a reflection of his personal passions and ideals. Through this essential film, viewers may find the puzzles that provide the key to the director's other works, including THE SACRIFICE and SOLARIS.