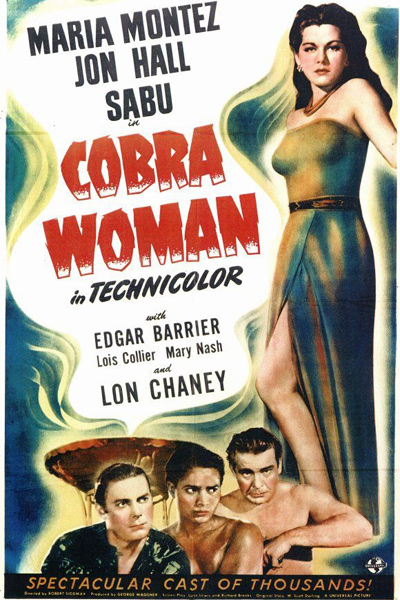 Tonight's film is being screened in anticipation of the Brakhage Symposium, which this year will be discussing the work and legacy of George Kuchar - who (along with many other underground and experimental filmmakers) considered COBRA WOMAN a classic.
This melodramatic/adventure film of the South Seas directed by Robert Siodmak (yes, of THE KILLERS fame, which was Burt Lancaster's film debut and Ava Gardner's first dramatic role and that earned Siodmak his only Oscar nomination). Maria Montez plays dual roles as a virtuous princess and her evil twin, the iron-fisted, fabulously attired ruler of Cobra Island. Cobra Island is a place where strangers are instantly put to death, and inhabitants are periodically thrown into the local volcano. This CinemaScope and Technicolor spectacle influenced the camp aesthetic in films by Jack Smith, John Waters, and George Kuchar. Kenneth Anger has called it his favorite film.

Co-promoted by The Brakhage Center Symposium