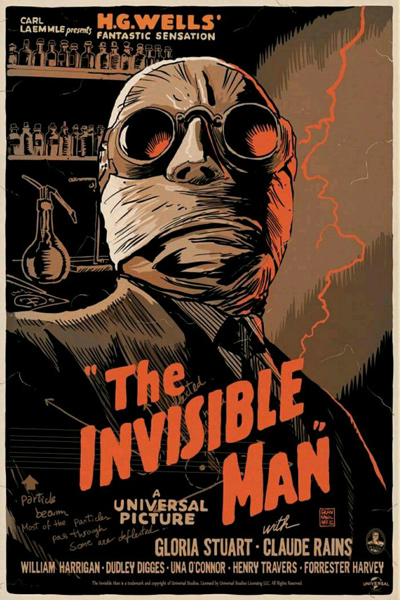 No actor has ever made his first appearance on the screen under quite as peculiar circumstance as Claude Rains does in the picturization of H. G. Wells's novel "The Invisible Man," which is the chief attraction at the Seventh Avenue Roxy. Other players have, it is true, been thoroughly disguised by weird make-up, but in this current offering Mr. Rains's countenance is beheld for a mere half minute at the close of the proceedings. The rest of the time his head is either completely covered with bandages or he is invisible, but his voice is heard.

This eerie tale evidently afforded a Roman holiday for the camera aces. Photographic magic abounds in the production, the work being even more startling than was that of Douglas Fairbanks's old picture "The Thief of Bagdad." The story makes such superb cinematic material that one wonders that Hollywood did not film it sooner. Now that it has been done, it is a remarkable achievement. It was directed by James Whale, and R. C. Sherriff, author of "Journey's End," wrote the script. Although various incidents may be spine-chilling, it is a subject with a quota of well-turned comedy.

It is a case of a chemist named Jack Griffin, who, having fathomed the mystery of making himself invisible, is unsuccessful in discovering an antidote to bring him back to flesh and blood. He first appears wearing clothes and gloves and his head swathed in linen bandages. He is irritable at the outset, but the concoction used to make himself invisible, referred to as "monocane," eventually causes him to go mad. If he wears clothes he can be seen, but his undiscernible body has bulk and the same strength it possessed in its carnal form. His dream was to make a man who could invade secret conferences, kings' palaces, and go anywhere without being seen. He had hopes of selling his secret for millions to some government which thus could conquer the world with invisible armies.

The ghastly sight of the chemist is first beheld in a small English inn. He moves slowly and talks in a full-throated voice. He chooses a room and orders a repast, waiting until the inquisitive landlady is out of sight before he begins to eat. Then he unwinds the bandage and it is quite a shock to observe that he has no chin. He continues to unwrap the linen and soon one observes this strange apparition, if it can be termed one, with no head. It is therefore not surprising that, what with his bad temper and his tyrannical conduct toward the servants, the inn keeper and his wife want to get rid of him, for they imagine he has either suffered frightful injuries in an automobile accident or is hiding his countenance because of some crime he had committed.

Soon the countryside is looking for the invisible man and the question arises as to how they can possibly catch him. All sorts of queer things happen when Griffin, unseen, enters a meeting and eventually kills the police inspector who insisted that the invisible man was a hoax. An associate named Kemp reveals an unwillingness to help, but the invisible Griffin insists that Kemp must save him from detection. Griffin explains that if he walks in the rain without clothes water causes an outline of his head and shoulders. In a fog he appears like a bubble and in smoky cities the soot is apt to settle on him. Kemp, he says, must always be on hand to wipe off his feet.

Scotland Yard not only sends out its available force but calls for soldiers and volunteers to help in the apprehension or the killing of the invisible man. He enters a room and one sees books leaping from tables and going through the air to a window sill. A chair topples over. When he retires for the night it is a headless and footless pair of pajamas that gets in between the sheets. At one point of the proceedings he steals a policeman's trousers and a little later one perceives the trousers hopping and skipping down a country lane.

While policemen are hand in hand surrounding a place the invisible Griffin gets among them, slapping one bluecoat's face, punching and kicking others. What eventually happens in this fantastic affair is best left for the reader to find out when he goes to the Roxy. There are but few inconsistencies in the picture, the author and the producers having covered their tracks shrewdly most of the time.

It is hardly necessary to dwell upon the performances of the cast beyond saying that they all rise to the demands of their parts. As for the settings, they seem very real, and the direction and acting of the uniformed police force are unusually good.