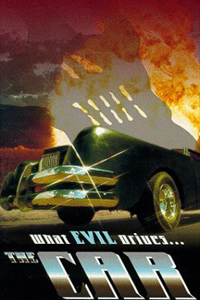 Fasten your seatbelts for the terrifying thrill ride that has become a cult classic - The Car! The peaceful tranquility of a small Western town is disturbed when a murderous car wreaks havoc by viciously mowing down innocent victims. New sheriff Wade Parent (James Brolin) may be the only one who can stop this menace in its tracks until he realizes that the driver of this indestructible vehicle is far more dangerous than any man it is driven by pure evil.

Why the Lord of Evil would choose a small town in southern California (Read into this: desert.) to terrorize with a custom musclecar is beyond me, maybe he just does dumb things at times. The fear campaign proceeds quite well and soon the sprawling town (Population: 40 or so.) is paralyzed, even their amazing police force can't help. Why they needed ten deputies is beyond me anyway, was this place colonized by Hell's Angels or something? Even a tank would have a hard time stopping this car though, at one point it is faced with two patrol cars. Amazingly it turns and begins flipping, rolling over and squashing them before driving off. (The wonders of special effects, or maybe just having two cars and a jumble on the editing room floor.) Everyone struck by the car becomes a fatality, despite the fact that it never runs over them, instead propelling them through the air like some strange tennis ball machine that shoots humans vice tennis balls.