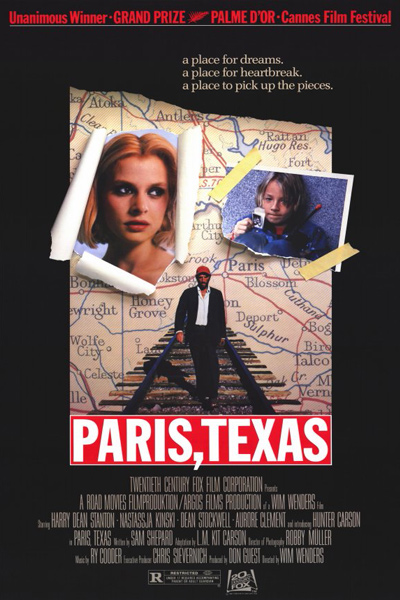 Paris, Texas is Wenders’s best-known and internationally most successful film. Celebrated by critics, it won a series of important international awards, including the Palme d’Or at Cannes. This unconventional road movie is based on a script by Pulitzer Prize winner Sam Shepard and tells the story of Travis (Harry Dean Stanton), a man who wanders out of Mexico and into the blazing heat of Texas’s Big Bend one day. Travis does not speak a word. He also seems to have largely lost his memory. But he is driven by his wish to find his family again: his young wife, Jane (Nastassja Kinski), whose life he seems to have placed in danger through his pathological jealousy, and his seven-year-old son, Hunter (Hunter Carson). For four years, Travis was thought to be dead. His brother, Walt (Dean Stockwell), flies from L.A. to Texas to bring back his lost sibling. Walt and his wife, Ann (Aurore Clément), have become Hunter’s foster parents. It is very difficult for the two of them to now give up this role, especially when they learn that Travis wants to take his son in search of Jane. They know nothing about her, except that she probably lives in Houston . . . In addition to impressive performances by Stanton as Travis and Kinski as Jane, a unique soundtrack by Ry Cooder has made Paris, Texas a cult film.