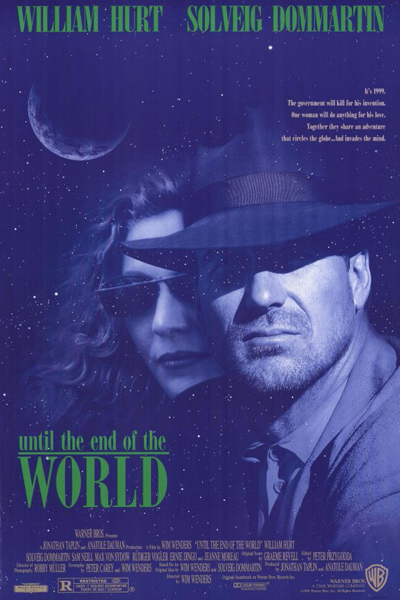 Until the End of the World is “the ultimate road movie,” a journey around the globe, a modern-day odyssey—and it certainly bears similarities to Homer’s saga. However, the aim of this journey is the spiritual reconciliation between an obsessed father and his lost son, and, in Until the End of the World, Penelope decides to set out in pursuit of Odysseus. In order to enable his blind wife (Jeanne Moreau) to see, Dr. Farber (Max von Sydow) invents a process that makes it possible to transmit the images recorded in the brains of sighted people directly into the visual systems of blind people. Farber’s son Sam (William Hurt) sets out on a journey around the world in order to “see” and record the various stations of his mother’s life for her. The Frenchwoman Claire (Solveig Dommartin) falls in love with him and sets out in pursuit of him. She, in turn, is followed by the author Eugene (Sam Neill), who is recording her adventure. The film was shot in 1990 and takes place in the near future, around the turn of the millennium. What most interests Wenders here is how humanity learns to deal with images—or becomes their victim. Eugene notes: “In the beginning was the word. What would happen if only the image remained in the end!?” Frustrated with the Reader’s Digest version of his film, which was forced upon him by his distributors, Wenders created a director’s cut two years after its release: at a length of almost five hours, it lives up to his intentions and to the epic nature of the story.