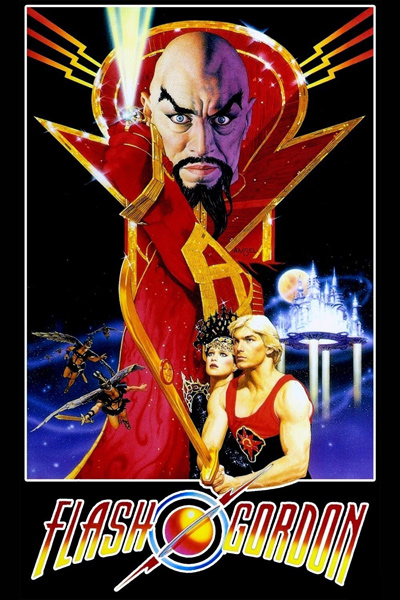 With gaudy sets and costumes by Fellini’s favourite designer Danilo Donati and ultra-camp performances throughout, this is a film that positively revels in its cheesiness yet stays true to the goofy spirit of Alex Raymond's original 1930s comic strip and the old matinee serials starring Buster Crabbe.

Former Playgirl centerfold Sam J Jones makes a rather bland Flash, it must be said, and Melody Anderson is equally insipid as Dale, but Max von Sydow twinkles villainously as Ming and Ornella Muti, unforgettable in figure-hugging red spandex, is wickedly sexy as his pervy daughter.

More depravity is supplied Peter Wyngarde (of Department S and Jason King fame) and Mariangela Melato as Ming’s generals, while the forces of good are represented by Timothy Dalton, dashing about as an Errol-Flynn-like prince in green tights, and Brian Blessed, blustering boisterously as the leader of the winged Hawkmen.

That the blessed Blessed fits in perfectly here gives you an idea of how OTT everything is, yet even he is outdone by the Queen soundtrack featuring Freddie Mercury in his thrilling vocal pomp.