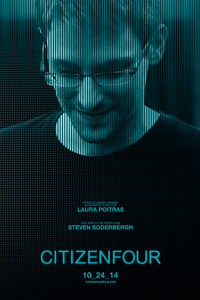 Please note that this screening starts at 5pm! This is so that people can watch the documentary before walking over to Macky. Former National Security Agency contractor and heroic whistle-blower Edward Snowden now lives in Russia and faces federal charges in the US for alerting US citizens to how the government was spying on them. Tonight, the Distinguished Speakers Board will be bringing him via live video chat to Macky Auditorium from 7pm - 8:30pm for an event that will allow members of the audience in Macky to ask him questions. We're bringing back the award-winning documentary about Snowden to IFS so that interested students and members of the public who missed it the first time can get the background needed to ask intelligent questions. Anyone with a Buff One Pass gets in free! Please note, again, that this presentation starts at 5pm, and because it's almost two hours long we'll be starting it exactly at 5pm to allow a few minutes for people who have tickets to Macky to walk over to that venue.

The documentary of the year may also be its most hair-raising thriller. Part of Laura Poitras’s Citizenfour’s thrill is that it allows the viewer to experience, first-hand, history being made, as National Security Agency whistle-blower Edward Snowden, hiding in a Hong Kong hotel in the summer of 2013, exposes how the U.S. government used an unprecedented global surveillance program of phone calls, e-mails, debit transactions and Web searches in the trillions. For those who think the Snowden revelations are already old news, the movie offers extensive fresh justifications for paranoia, including more evidence of unbounded government surveillance and a final kicker promising bigger revelations to come.

Poitras, a journalist and acclaimed filmmaker, was a key player in the Snowden leaks and her perspective is unapologetically one of an impassioned advocate for privacy rights. Appropriately, she never appears on-camera herself but uses voiceover and images of her e-mails – white text against a black background – to show how the Snowden story unfolded. Believing she was on a U.S. government secret watch list for her two previous post-9/11 documentaries, My Country, My Country (2006), about life in Iraq under U.S. occupation and The Oath (2010) about prisoners in Guantanamo. She moved to Berlin to avoid harassment, where, in January, 2013, Snowden anonymously contacted her using the codename “citizenfour.” He got her attention when he confirmed she had been “selected” for special monitoring. He had other revelations to offer, including, in time, his identity, to avoid others being scapegoated. They agreed to meet in Hong Kong at the Mira Hotel, along with journalist Glenn Greenwald, the exceedingly bright Rio de Janeiro-based American legal and political columnist for The Guardian. Also joining them partway through the stay was Ewen MacAskill, an investigative reporter for the same publication.

About an hour of Citizenfour takes place in the Mira Hotel, a vertiginous experience of revelations, paranoia (is the hotel phone tapped?) and strategies for how to reveal Snowden’s role in the exposé. As Greenwald’s stories for The Guardian and Poitras’s for The Washington Post make an impact, they watch the reaction on the hotel room television. The boyish 29-year-old Snowden is nervous but sounds more matter-of-fact than zealous when he observes, “We are building the biggest weapon for oppression in the history of mankind.”

Almost another hour of the film offers background about the modern surveillance world (the subject of a film Poitras was already working on when Snowden contacted her). We see, for example, Director of National Intelligence James Clapper and then-director of the National Security Agency (NSA) Keith Alexander lying to Congress about the extent of government spying. We also hear testimony from William Binney, another former NSA staffer turned whistle-blower, before the NSA commission of German Bundestag last summer. All of it may make you think twice every time you click, call, pay or travel.

The final segment of the film is an extraordinary teaser that demands a sequel: Greenwald goes to Moscow to see Snowden, who found asylum there, with some important new information. Over Greenwald’s shoulder, Poitras’s camera catches glimpses of quickly scribbled and immediately destroyed notes, indicating a second inside source and revelations leading directly to the White House. Inquiring minds – and not the kind that keep secret government files – need to know.

— Liam Lacey, The Globe and Mail