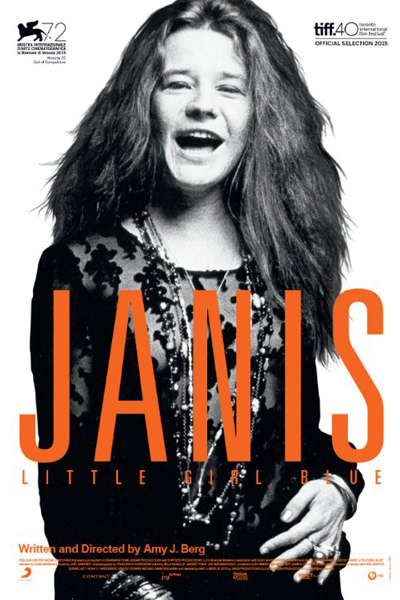 Janis Joplin is one of the most revered and iconic rock & roll singers of all time, a tragic and misunderstood figure who thrilled millions of listeners and blazed new creative trails before her death in 1971 at age 27. With Janis: Little Girl Blue, Oscar-nominated director Amy Berg (Deliver Us from Evil, West of Memphis) examines Joplin’s story for the first time on film, presenting an intimate and insightful portrait of a complicated, driven, often beleaguered artist.

With massive hits including “Me and Bobby McGee” and “Piece of My Heart,” and such classic albums as Cheap Thrills and Pearl, Rock and Roll Hall of Famer Joplin was one of the definitive stars to emerge during the musical and cultural revolution of the 1960s. She delivered the breakout performance of the Monterey Pop Festival, and was one of the most memorable highlights at Woodstock. Her legacy has only grown since her passing; she ranked high on Rolling Stone’s lists of both the Greatest Singers and Greatest Artists of All Time, and is claimed as an influence by virtually every female rocker who has followed (and many male singers, as well).

Yet, as Janis: Little Girl Blue reveals, Joplin never fully recovered from the persecution she felt as a social outcast during her adolescence in Port Arthur, Texas—and for all of her on-stage bravado and her uninhibited, sexualized persona, she was haunted by insecurity and a need for acceptance throughout her life. When she discovered the blues, she found an outlet for her pain and loneliness, and when she made it to San Francisco at the dawning of the hippie era, she fell into a community in which she finally felt she belonged. Ultimately, Janis Joplin is a paradox, a pioneer for a new kind of female performance and image who never stopped seeking love and domestic stability, always on her own terms.

Joplin’s own words tell much of the film’s story, through a series of letters she wrote to her parents over the years, many of them made public here for the first time (and read by Southern-born indie rock star Cat Power). This correspondence is only one element of the stunning, previously unseen material Berg discovered during the seven years she has spent working on Janis: Little Girl Blue. New audio and video of Joplin in concert and in the studio (some shot by legendary filmmaker D.A. Pennebaker), and even footage from her emotional return to Port Arthur for her tenth high school reunion, add depth and texture to this remarkable story.

Interviews with Joplin’s family, childhood friends, musical associates, and such noted colleagues as Bob Weir of the Grateful Dead and TV host Dick Cavett give a complete sense of someone who struggled to connect with both individuals and audiences, but rejoiced fully when she made those bonds.

Janis Joplin was a powerhouse when she sang, and her recordings have never left the radio or the hearts of rock fans worldwide. With Janis: Little Girl Blue, though, Amy Berg offers new understanding of a bright, complex woman whose surprising rise and sudden demise changed music forever.