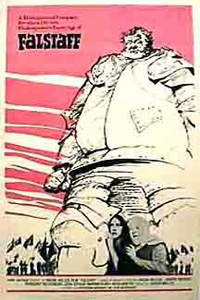 Family lore has it that, at two years old, Orson Welles asked his mother to read unabridged Shakespeare to him rather than a children’s version. His fascination with the plays of William Shakespeare would continue for the rest of his life.

Welles would go on to adapt, direct, and perform in dozens of the Bard’s plays over the years (including his first production for the New Deal’s Federal Theatre Project, a “voodoo” Macbeth, set in Haiti), and to direct three Shakespeare films—Macbeth (1948), Othello (1952), and, most magnificent of all, Chimes at Midnight (1966)—as well as the documentary Filming “Othello” (1978). The most complexly conceived and technically brilliant of these films, Chimes at Midnight was the culmination of a career-long passion project that Welles had been working on since before he got into filmmaking. When the Wisconsin-born Welles was a student at the Todd Seminary for Boys in Woodstock, Illinois, he became heavily involved in theater. During that time, his most ambitious production was a play he created that conflated and streamlined eight of Shakespeare’s histories: the two parts of Henry IV, Henry V, Richard II, Richard III, and all three parts of Henry VI. This experiment afforded Welles his first opportunity to play Shakespeare’s roguish Sir John Falstaff, the childhood friend of Prince Hal (the future King Henry V) and one of the most colorful and complex of all the Bard’s characters.

Welles would play Falstaff again in 1939, when the then established theater star produced the elaborate Five Kings—based on the Henriad (a common scholarly term for the cycle of plays that includes Richard II; Henry IV, Part I and Part II; and Henry V)—for the Theatre Guild. Though the production was intended to unfold over the course of two separate plays on different evenings, Five Kings closed after only the first part had been staged, due to financial problems. In 1960, Welles returned to the character of Falstaff, restaging part of Five Kings in Belfast and Dublin, with Welsh actor Keith Baxter as Prince Hal; this time he called it Chimes at Midnight, the title taken from a Falstaff line in Henry IV, Part I. So when Welles finally began work on the film Chimes at Midnight, he had not only thought a lot about this cycle of plays but also lived with them for many years. By this point, he had grown especially fond of, even obsessed with, the character of Falstaff, whom he began to see in grandly tragic terms rather than as just a figure of comic relief, as he was often depicted and discussed. He also called Falstaff “the most difficult part I ever played in my life.” Welles saw Falstaff not as a buffoon but as a poignant father figure for the wayward young Prince Hal, who’s torn between his friend Falstaff and his real father, King Henry IV. In writing the screenplay for Chimes at Midnight, which is primarily based on Henry IV, Part I and Part II (though also incorporates elements from Henry V and Richard II, as well as some lines from The Merry Wives of Windsor), Welles shifted the emphasis away from Hal, heir apparent to the English throne, and onto Falstaff; the film’s devastating emotional climax thus becomes Hal’s ultimate betrayal of Falstaff’s friendship. In a 1966 Sight & Sound interview, Welles called Falstaff “the greatest conception of a good man, the most completely good man, in all drama.”

More than just a study of a character that Welles felt had historically not been taken seriously enough, Chimes at Midnight was also, to the director, a lament for a passing era, a film that he said was about “the death of Merrie England . . . the age of chivalry, of simplicity, of Maytime and all that.” One of the things that most fascinated Welles about the Henriad was how it charted England’s transition from the medieval period to the Renaissance. In this way, Chimes at Midnight is like Welles’s 1942 masterpiece The Magnificent Ambersons, another film that took historical change as one of its main subjects—in that case, the turn of the twentieth century and the transition to a more modern, technological period. Welles wanted to explore the very notion of nostalgia. He said to Peter Bogdanovich in an interview, “What interests me is the idea of these dated old virtues. And why they still seem to speak to us when, by all logic, they’re so hopelessly irrelevant.” Even Citizen Kane is, at its heart, a film about a lost paradise, a past that, once gone, can never be recaptured.