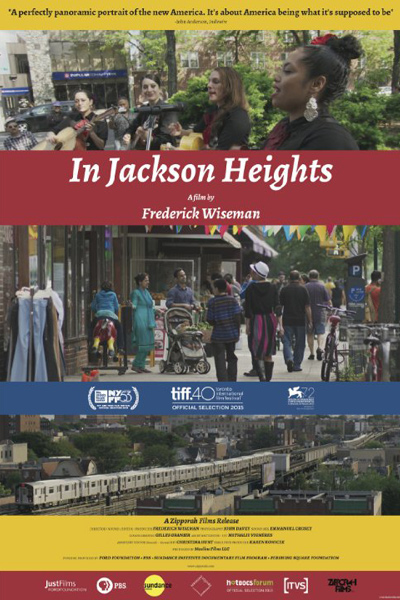 In the course of his brilliant, nearly half-century career, Frederick Wiseman has tackled both great social institutions (a prison for the criminally insane, high school, military, police, juvenile court, the welfare system) and cultural ones (La Comédie Franҫaise, the Paris Opéra Ballet, American Ballet Theater, London’s National Gallery). Here he profiles a community, Jackson Heights, one of New York’s most diverse neighborhoods, with immigrants from Peru, Colombia, Mexico, India, Bangladesh, and Pakistan (167 languages are spoken) -- as well as elderly residents of Jewish, Irish and Italian extraction. Under the elevated train, a hodge-podge of stores sell whole baby goats, saris, and Bollywood DVDs; they offer HIV testing, Tibetan food, and classes for would-be cabbies. Jackson Heights is home to an activist LGBT community, to recent survivors of terrifying border crossings, students of the Quran, and small shop-owners who mobilize against the Williamsburg-ization of the nabe. Wiseman embraces a community that revels in still being affordable, 20 minutes from “the city,” and resolutely unhip.