ReBirth of a Nation

With DJ Spooky in person! 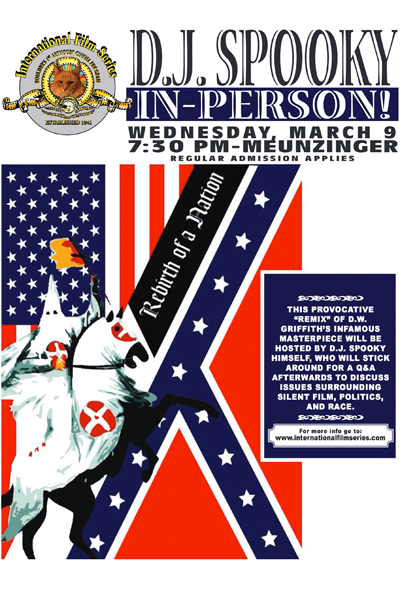 DJ Spooky (nom de plume of hip-hop multimedia artist Paul D. Miller) will introduce and do Q&A for his re-edit of D.W. Griffith’s insidious but perpetually canonical The Birth of a Nation (1915) this Wednesday at Muenzinger auditorium at 7:30pm. D.J. Spooky dubs his re-edit Rebirth of a Nation and spikes the images with animated doodles or highlights notable details, gestures, or expressions and spends nearly twice as much screen time on the Reconstruction (the second act of Griffith’s diptych) as it does on the Civil War. Though he gives the truncated film a moody new score and drops in some critical commentary at various junctures, for the most part he lets the film’s most hateful images play out stripped away from the historical pageantry. With the KKK recently making headlines again, the time is ripe to revisit the racist tropes of the first film to ever screen in the White House.

ReBirth of a Nation