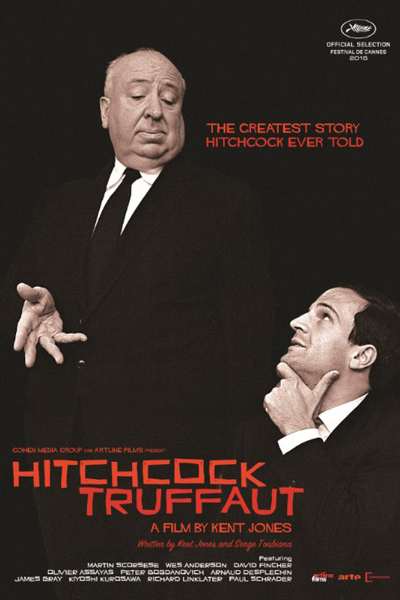 You know what this is? Nirvana for movie lovers. Film historian Kent Jones, the director of the New York Film Festival, triumphantly takes us back to 1962 when the young French filmmaker Francois Truffaut worked up the nerve to ask Master of Suspense Alfred Hitchcock to sit for an eight-day interview. We hear Hitchcock's voice on pristine audio tapes and see photos (by Philippe Halsman) of the two men and translator Helen Scott. What Truffaut wanted most was to show the world that Hitchcock was an artist, not just a popular entertainer hellbent on making audiences scream at things that go bump in the night. The interviews resulted in a book Hitchcock/Truffaut, that became a must for every film buff.

But, hey, that was 50 years ago. What does that historic conversation have to say to a new generation? Glad you asked. Jones has wisely and wittily selected scenes from Hitchcock's films to illustrate the points being made. He's also gathered contemporary filmmakers to speak of Hitchcock's influence on them. What a treat to hear Martin Scorsese, Wes Anderson, David Fincher, Olivier Assayas, Paul Schrader, Peter Bogdanovich, Arnaud Desplechin, James Gray, Kiyoshi Kurosawa and Richard Linklater dig into the Hitchcock canon. Vertigo clearly had a visceral impact on all involved. "It's so perverted," says Fincher with a dirty laugh that suggests the subversive layers that helped the movie topple Citizen Kane from the top of Sight & Sound magazine's all-time-great-films poll.

From The 39 Steps and The Lodger to Rear Window, Psycho and all stops in between, this film gets us drunk on Hitchcock's movies again. My only problem with Hitchcock/Truffaut is that it's too short at 80 minutes. More please, and soon.