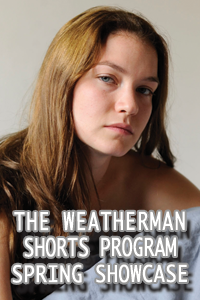 Bubbie.
(Samantha Pollak, USA, 2016, 8min)
A poetic exploration of the relationship between a young woman and her ailing grandmother.

Path Of Pluto
(Oren Franklin, USA, 2015, 20 min)
"Path of Pluto" is  about a group of nomadic non-Native queer, trans, and gay rewilders who seek to reject a life of material excess and instead practice Indigenous techniques of relating to land in the Pacific Northwest. This film is an experimental exploration into the constructs of settler colonialism, the romantic fetishization of Indigenous culture and "the Wild", and the reality of those attempting to circumvent the traumatic legacy of the United States and its relationship to people, land, and resources.

Take What You Can Carry
(Matt Porterfield, USA/Germany 2015, 30 mins)
A character study as well as a meditation on communication, creativity, and physical space, Take What You Can Carry is a picture of a young woman seen through the interiors she occupies and the company she keeps. A North American living abroad, Lilly aspires to shape an intimate and private place of her own while connecting to the world around her. When she receives a letter from home, it provides the conduit she needs to fuse her transient self with the person she’s always known herself to be.