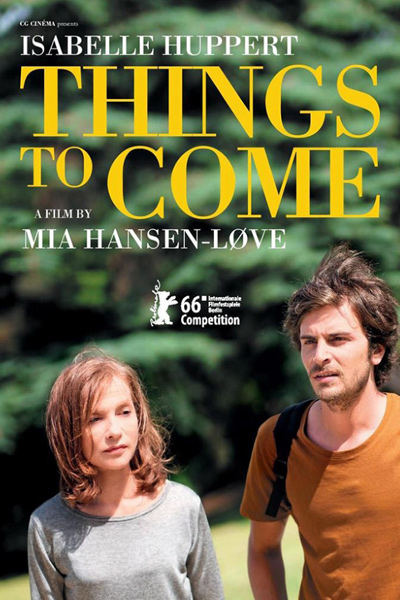 Here’s what is great about Mia Hansen-Løve‘s “Things to Come,” apart from everything: In a fit of pique, recently separated philosophy professor Nathalie, played with immaculate transparency by Isabelle Huppert, goes to throw away a bunch of flowers too big to fit in her kitchen bin. The messy and now crumpled arrangement is unceremoniously stuffed into one of those bright blue IKEA bags instead, which Nathalie huffily crams into the big industrial trash can in her building’s basement. She slams the lid shut with finality and leaves. Two seconds later, she comes back for the bag.

It’s a tossed-aside moment that is nothing and also everything — certainly to anyone who’s ever found it hard to part with a sturdy carrier bag. The catching of that little tic demonstrates Hansen-Løve’s refreshing approach. It’s an acknowledgement that while there are milestones and hitching posts along the route, life is actually lived in the spaces in between. Our experience of the world is not that we are pinging from grand gesture to dramatic declaration to titanic confrontation but that those things happen in milliseconds, and the rest of the years of our lives are taken up dealing with their prosaic little consequences. When blood has cooled, when your real self has taken over again, when you go back for the bag.

With her last film, the wonderful “Eden,” Hansen-Løve showed a similarly singular mastery of time — the ability to have her stories seamlessly span vast periods while occupying an endlessly unfolding present tense. So we never chase after Nathalie, or look back at her with nostalgia or regret, we are simply in step alongside her in every moment, looking out into the world with eyes that do not yet know anything of those things to come.

Nathalie makes such an unusual subject, however, because of the years of experience behind her present tense: where previously the director has outlined the angsty lows and giddy highs of the young and mildly baffled (Hansen-Løve is 35) “Things to Come” looks unflinchingly at a woman in late middle-age. And, of course, she has chosen the most pristine actress around whom to build this casually stunning portrait. Nathalie may be approaching the late afternoon of her life, but Huppert finds in her all the colors of the rainbow: she’s as kind as she is bitter, as wise as she is naive, and as funny as she is serious. It’s a joy to see the synchronicity achieved between writer/director and star here, though both are so committed to this character that it would be possible not to “see” either of them, to simply look straight through their contributions (and even through Denis Lenoir‘s terrifically understated photography) at a person made so skilfully into a story.

And that’s the amazing part. A lot of dramatic things happen —  infidelity, divorce, truncated vacations, the death of a parent, the birth of a grandchild. But the film is untainted by melodrama, punctuated with digressions about philosophy (frequently in conversations between Nathalie and her protege, Fabien, played by Roman Kolinka) and often willfully droll and ambivalent; you could think that nothing really happens at all. We spend less time on the dissolution of a 25-year marriage, which happens in an undemonstrative scene where nothing is thrown, but everything is immediately broken, than we do on an argument over a jazzy jacket design for a philosophy textbook. Nathalie’s is a state of ongoing flux that moves in little rivulets, rather than the slow swells and crashing waves of traditional three-act structure.

Hansen-Løve’s unabashed focus on Nathalie and her relatively rarefied world will, once again, give her detractors ammunition. And to be sure, “Things to Come” is informed by the director’s own life, and brimful of heterosexual, college-educated white people fretting over loaned books and debating esoteric philosophies over wine. But — buzzword alert — privilege raises its ugly head when there’s an assumption of the universality of such experience, not such thoughtful and specific, hard-earned proof of it. Not everyone will get older in such an environment and with such self-examined intellectualism, but everyone will get older and will have to find their own resources to confront that inevitability. That is where “Things To Come” is universal — not in what-it-is-about, but in the way it is about it.

It is playful and serious, sometimes simultaneously — the weird irony of finding out about your mother’s death as you attempt to evade the amorous attentions of a pervy stranger who sat next to you in a movie theater feels so absurd that it can only be true. A distinctly “Inside Llewyn Davis“-esque displaced cat provides some funny moments (some even soundtracked to Woody Guthrie), and gentle symbolism if you want it, but it is also just a cat. While we’re almost always looking at Nathalie, she is not immune from the judgements of those around her, and Hansen-Løve knows just when to switch focus or to linger in a room she’s left to catch an eye roll, or an eloquently sardonic exchange of glances.

Mostly this is a thrillingly compassionate, deceptively simple, and wholly invested look at a capable older woman with a lively mind coping with a series of common misfortunes. Where that could be depressing, or at least overridingly melancholy, here it is strangely hopeful: there are moments when you think the narrative will take one turn or another, and that something or someone will rescue Nathalie from her aloneness in the face of this catalogue of little crises. But by the time the shimmery a capella cover of “Unchained Melody” by The Fleetwoods strikes up at the end, you realize what Hansen-Løve’s real agenda is here: it is to show a woman of an age and lifestage that is most often ignored, marginalized, or pitied in the canon of modern cinema, as she busily rescues herself, every day of her life.