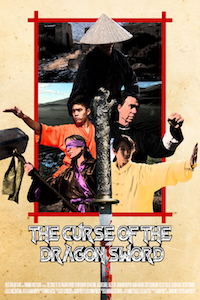 IFS projectionist and Curse of the Dragon Sword Director, Jason Phelps in person!
The Dragon Sword series is the culmination of many local, Boulder talents coming together to create an action-packed homage to the classic Kung Fu films. Originating as a Cinema Production I class final project at The University of Colorado Boulder Film Studies program, the series has taken off, winning the Grillo Award that year as well as spawning a fan-requested sequel. Principal photography for "The Return of the Dragon Sword" began in mid to late February, 2015, and includes many of the same cast and crew as the original. After its release in May, yet another fan-requested sequel was pushed, this time with the help of producer Travis Mills and Executive Producer Alex Cox, and would be made into a feature length film.