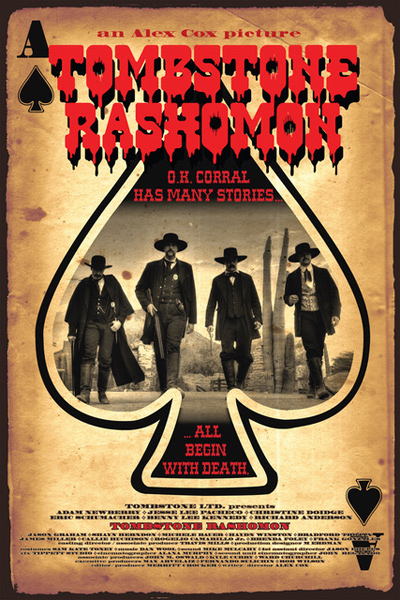 Various films and many books have provided different perspectives on the Gunfight at the O.K. Corral. Now, Alex Cox, director of "Repo Man", "Sid & Nancy", and many other films, tells the story from multiple perspectives, in the manner of Akira Kurosawa's masterpiece but with a twist. Wyatt, Virgil and Morgan Earp each had his story, and Doc Holliday his; Sheriff Johnny Behan was present at the shootout, having tried to prevent it; Ike Clanton and Billy "the Kid" Claiborne survived the gun battle and told their tale; Kate Fisher, Holliday's partner, was lodging in the adjacent building and said she witnessed the shootings. All the main characters herein get interviewed Errol Morris-style by an an unseen presence. It is fitting that Alex Cox, who wrote a book about JFK and Lee Harvey Oswald, as well as a comprehensive view on Spaghetti Westerns, should here fuse two passions into one unique project. He's directed a couple westerns before, including "Straight to Hell" and "Walker", and with "Tombstone Rashomon" he writes and directs a project that, by his own admission, provided him with the most fun he ever had on a film shoot.