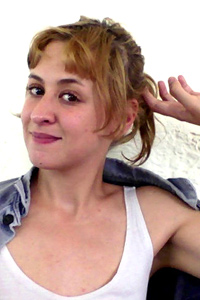 Basma ALSHARIF is an Artist/Filmmaker born in Kuwait to Palestinian parents, raised between France and the US. Since receiving a Master of Fine Arts in 2007 from the University of Illinois at Chicago, she developed her practice nomadically between Chicago, Cairo, Beirut, Sharjah, Amman, the Gaza Strip and Paris. Basma's work centers on the human condition in relation to shifting geopolitical landscapes and natural environments. Interested in what cannot ever be proven or explained, she uses photography, film, video, sound, language and performance to reveal the fallibility of our perception and of history. Engaging with politics on a visceral level through pieces characterized by their immersive, lyrical qualities, Alsharif creates familiar environments that lure us into unsettling experiences of being comfortable and foreign simultaneously.. More info at First Person Cinema.