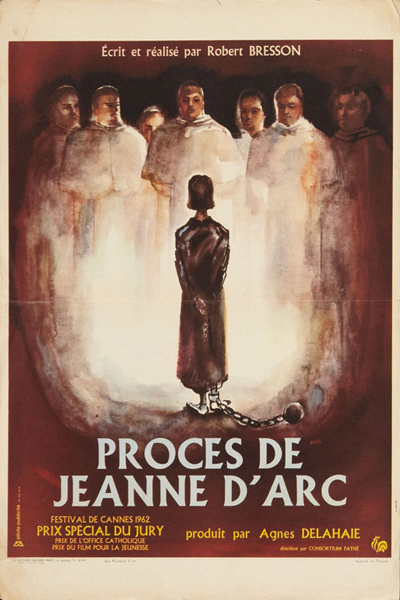 It was quite audacious of Robert Bresson to make the 65-minute French film he calls "The Trial of Joan of Arc." For this rigidly realistic picture comes so close to being a duplication of the classic "Passion of Jeanne d' Arc" of Carl Theodor Dreyer that it can't help being sternly compared to it, if not charged with being an outright steal.

It is, as Mr. Dreyer's brilliant picture (made in 1928) was, a straight photographic reproduction of the trial of the maid, her confession, her recantation and then her burning at the stake. The camera never goes beyond the court-room, the adjacent corridors or Joan's bare cell, until it finally goes out into the Place du Vieux Marche in Rouen, where the execution was performed.

In the long dialogic exchanges that take place between the maid and her determined interrogators, the camera seldom moves beyond back-and-forth medium-close shots of the participants in the dialogue, which, incidentally is taken verbatim from the records of the trial.

The questions are asked in terse, flat fashion, and Florence Carrez, playing Joan, answers without change of expression and in a muted monotone. It is as though the director had distinctly aimed to make this a passionless report of the nature of the famous trial at Rouen, without bias toward either side.

Even one brief shot of the prisoner's being tortured on the rack is objective and unemotional, without a clear look at her face.

Indeed, the only moment in which the camera becomes involved in an implication of emotion is a close shot of Joan's bare feet, shuffling along a watery stone pavement and then stopping at the steps to the stake, there to pause while the mind of the viewer absorbs the intense significance.

Thus there is very little acting of a conventional sort in the film. The accomplishment of the participants is their ability to be consistently motionless and either passive or severe. The impact—what there is of it—comes from the starkness of the scene, the monotony of the rhythm, the austerity of the end. One must commend the director for making his film state these things. One has to be frankly regretful of the lack of dramatic highs and lows.