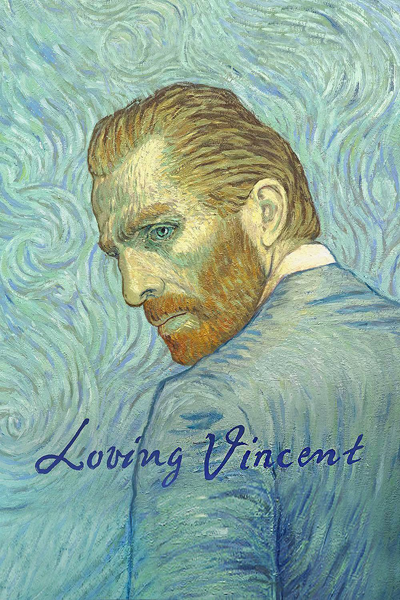 It's so resplendent with rich colors and textured and vibrant brush strokes that at times it overwhelms the film's narrative, which concerns the troubled artist's death in 1890.

Think of "Loving Vincent" as a murder mystery inside a wildly imaginative graphic novel where Van Gogh's paintings come alive.

Polish husband-and-wife filmmakers Dorota Kobiela and Hugh Welchman filmed the story using a live-action cast in period costumes and sets. Then, they assembled a team of more than 100 classically trained artists to hand-paint each of the 65,000 frames using oil paint in Van Gogh's style, bringing some of the Dutch painter's most famous scenes and portraits to life.

The process builds on the technique of rotoscoping, which uses live-action film to create animated sequences. Rotoscoping was patented in the U.S. 100 years ago by another Pole, Max Fleischer. "Loving Vincent" is said by the filmmakers to be the first entirely hand-painted feature-length film.

The story is told mostly using figures Van Gogh painted in portraits, voiced by professional actors, and is as much about the artist's life as his death.

The story begins a year after Van Gogh is believed to have intentionally shot himself in a field, and died in the inn he was staying two days later. A postmaster holding onto an undelivered letter from Van Gogh to his brother Theo asks his slacker of a son Armand Roulin (Douglas Booth) to hand-deliver it.

After Roulin learns Theo has died, he goes to a northern French town and begins to reconstruct the artist's waning days through the townspeople's conflicting stories. He meets Paul Gachet (Jerome Flynn), Van Gogh's homeopathic doctor, hoping he can forward the letter to Theo's widow.

In a matter of days, Roulin learns about Van Gogh's relationship with Marguerite Gachet (Saoirse Ronan), the doctor's daughter, meets the innkeeper's daughter Adeline Ravoux (Eleanor Tomlinson), who has plenty of speculations about her family's former tenant, and hears another doctor theorize that Van Gogh was murdered.

By then, the once indifferent Roulin has turned into a sleuth, determined to find out what really caused Van Gogh's death. The painter struggled with depression, but had basked about his upbeat mental state just six weeks before he allegedly pulled the trigger.

The clues start to add up to something other than a suicide -- at least they might. Or maybe not.

The filmmakers use black-and-white scenes to evoke flashbacks of Van Gogh, creating a sharp contrast to the blasts of color and the shape-shifting imagery drawn with thick paint strokes and light swirls.

Van Gogh (Robert Gulaczyk) is portrayed as someone committed to and passionate about his craft, but also a socially inept outcast whose brilliance is evident on canvas but not in his social encounters or in how he carries himself.

Others speak of Van Gogh, but he is rarely heard from except through letters he penned to Theo.

The soundtrack by Clint Marsell is affecting and at times mournful, while Lianne La Havas does a lovely version of Don McLean's "Vincent (Starry, Starry Night)" as the credits roll and the artist's own self-portrait appears.

The many artists who labored in anonymity to bring Van Gogh's artwork so gloriously alive have created something quite special. It's something Van Gogh fans and those unfamiliar with his work can revel in.