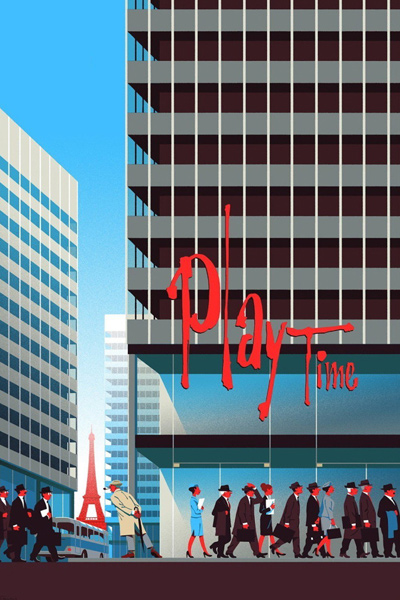 Playtime is Jacques Tati's most brilliant film, a bracing reminder in this all-too-lazy era that films can occasionally achieve the status of art.

Playtime is a gloriously funny movie about a Paris so modern it does not yet exist, a Paris composed entirely of streets like our Avenue of the Americas, hemmed in by efficiently beautiful glass-and-steel towers in which, if we are quick about it, we may see momentary reflections of Sacre Coeur, the Arch of Triumph, or the Eiffel Tower.

It is a city inhabited almost entirely by tourists and their shepherd-guides who are spreading a terrible pox among the natives. It is not an immediately fatal disease but it makes everyone behave with the kind of frigid competence affected by airline stewardesses and reservation clerks.

Not even nuns are immune. Their heels click importantly as they glide across marbleized floors. A receptionist—a man so ancient that he could be a veteran of Verdun—operates a complex of computer buttons designed to announce a visitor's arrival in an office building. The old man does his best and the machine bleeps and gurgles successfully. It is the world of Kubrick's 2001 without the metaphysics and without Richard Strauss.

It is virtually three major set pieces, or acts. The first act is set at Orly Airport, where we pick up some American tourists who arrive in a single, all-expenses-paid clump. The second is more or less devoted to a trade fair, where the tourists cross paths with Tati's Mr. Hulot.

The last act, a kind of neon-lit Gotterdammerung—is set in a posh nightclub whose opening night turns into the sort of chaos that civilizes. Everything goes wrong, including the air-conditioning, but in going wrong, life is somehow restored to the tourists as well as the natives.

You may well recognize the shape of the film, which is a variation on the favorite comedy theme about the family that inherits a lot of money, tries to put on fancy airs, loses its soul, and only finds itself again when the fortune is taken away.

However, it is not the shape of the film or its cheerful philosophy that are important. Rather it is the density of the wit. It is the gracefulness of the visual gags that flow one into another, nonstop, in a manner that only Tati now masters.

Mr. Hulot is still the nominal focal point of the comedy, particularly in the trade-fair sequence, but he is less in evidence in Playtime than in any other Hulot feature. The film is even further removed from character than was Traffic. It observes not persons, but social clusters, in a manner that serves curiously to humanize group action and response instead of to dehumanize the individual.

However, don't waste time analyzing Playtime too much. It can easily withstand such critical assaults, but they serve to distract attention from the film's immense good humor, from, for example, the closing sequence that shows us a Parisian traffic circle that has been turned into a giant lazy Susan, serving, among other things, the sacred cause of inefficiency.

In addition to everything else, Playtime is a reckless act of faith—by Tati in himself. He photographed it in 70mm (though it is being shown here in 35mm), and he invested not only huge amounts of time in it, but also his own money. As anyone connected with films can tell you, this is certifiable madness.

The movie business is supposed to exist so that people other than its artists can lose their shirts in it, thereby to gain things that are called (by those who can use them) tax-loss carry-forwards. I hope Playtime will make Tati very rich so that at some future time he can use a tax-loss carry-forward.