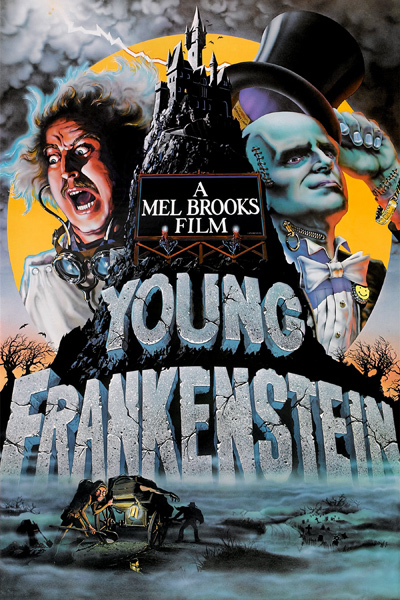 For even more interesting insight about Mary Shelley's Frankenstein, read this fascinating article from The New Yorker.
He's young. He's clean-cut. He's all-American. You are certain he uses the correct deodorants and aftershave lotions. He has a fiancée who's so fussy about her makeup that when they say good-bye, they don't kiss, they gently rub elbows. The young man is a brain surgeon named Dr. Frankenstein, but when a medical student calls him that, he has a fit. "No, no," he screams, "it's pronounced Fron-ken-shteen!" He doesn't want to be confused with his infamous grandfather.

As played by Gene Wilder in Mel Brooks's funniest, most cohesive comedy to date, this Dr. Frankenstein is a marvelous addled mixture of young Tom Edison, Winnie-the-Pooh, and your average Playboy reader with a keen appreciation of beautiful bosoms.

At this point in time it isn't easy to make fun of Mary Shelley's durable old chestnut about the visionary doctor and the monster to whom he gave life. All of the jokes would seem to have been told. Hammer Productions' Frankenstein movies employ deadpan humor. Andy Warhol's Frankenstein, released [in 1974], was an all-out assault that used wild anachronisms and grotesque special effects.

It would be misleading to describe Young Frankenstein, written by Mr. Wilder and Mr. Brooks, as astoundingly witty, but it's a great deal of low fun of the sort that Mr. Brooks specializes in.

Although it hasn't as many roof-raising boffs as Blazing Saddles, it is funnier over the long run because it is more disciplined. The anarchy is controlled. Mr. Brooks sticks to the subject, recalling the clichés of horror films of the 1930's as lovingly as someone remembering the small sins of youth.

Perhaps the nicest thing about Young Frankenstein is that one can laugh with it and never feel as if the target film, James Whale's 1931 classic that starred Boris Karloff, is being rudely used.

The new movie, which has Young Frankenstein returning to the family castle and bringing to life a monster played by Peter Boyle, is a horror film composed almost entirely of hilarious interruptions, including the doctor's near-fatal encounter with one of those mysterious bookcases that hides a secret door. It keeps turning around and hitting him in the back.

The doctor is helped in his endeavors by his loyal hunchback servant, Igor, pronounced Eye-gor, played by a nervily funny newcomer to films named Marty Feldman; by a pretty blond laboratory assistant (Teri Garr) who recalls (intentionally) every blond starlet who never quite made the big time; and, of course, by Mr. Boyle in monster-drag.

Madeline Kahn, one of the best things in Blazing Saddles, is in top form as the doctor's bossy fiancée who eventually finds sexual fulfillment in the arms of the monster, and Gene Hackman turns up in a pricelessly funny bit as the blind man who befriends the monster and after offering him a cigar carefully lights the monster's thumb.

The high point of the film is a sequence in which the young doctor takes his monster to a medical convention in Bucharest and demonstrates his accomplishment by joining the monster for several choruses of "Puttin' on the Ritz," both dressed nattily in white tie and tails.

Young Frankenstein, which opened [in 1974] at the Sutton, was photographed in black and white with fastidious attention to the kind of slightly fake details you'll find only in a studio-made movie over which tremendous care has been taken. It has an affectionate look to it, especially in the laboratory equipment that is said to be a reproduction of the stuff used in the Whale film.

Some of the gags don't work, but fewer than in any previous Brooks film that I've seen, and when the jokes are meant to be bad, they are riotously poor. What more can one ask of Mel Brooks?