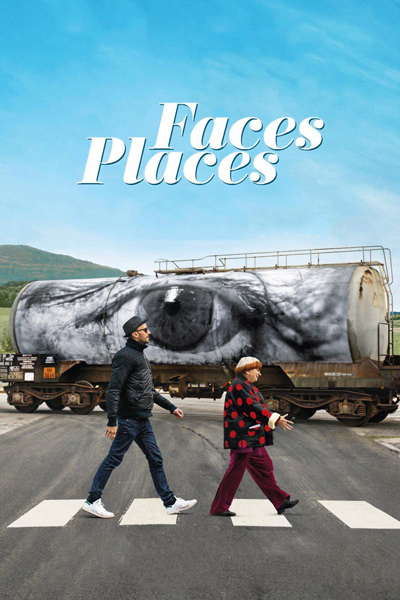 At 89, Agnès Varda is an artist with nothing to prove and everything to discover. A small woman with a two-toned pageboy and an open, unsentimental manner, she is an ideal traveling companion: a wise and canny guide, an impetuous risk-taker, a trusted friend.

Her recent documentaries, while not exactly confessional, are unabashedly personal, infused with her voice, her eye, her wry and rueful on-camera presence. Each film is a map of her thinking, a record of her musings and insights as she explores parts of the modern world — especially but not exclusively France — that less attentive voyagers might overlook.

The latest of these adventures, “Faces Places,” finds Ms. Varda in the company of a younger comrade, the 34-year-old French photographer and environmental artist known as JR. Together they set out on a series of meandering road trips through agricultural and industrial towns, talking to people and taking their pictures. (The French title, “Visages Villages,” is more specific than the English version about the kinds of places that interest them.) JR’s van is equipped with a printer that produces portraits big enough to cover the sides of barns, houses and apartment buildings and even, magnificently, a towering stack of shipping containers.

The easygoing, episodic structure of their journey gives “Faces Places” a deceptively casual air. It superficially resembles one of those ubiquitous cable-television shows in which a semi-celebrity bounces around the globe tasting the food and philosophizing with the locals. Ms. Varda and JR, who is tall and stylish and never takes off his sunglasses, are a charming pair. Their subjects are happy to chat, and touched (if also sometimes a little embarrassed) to behold their likenesses turned into large-scale public art installations. The film works just fine as an anthology of amiable encounters and improvised collaborations.

But it’s a lot more than that. Despite its unassuming, conversational ethos — which is also to say by means of Ms. Varda’s staunchly democratic understanding of her job as a filmmaker — “Faces Places” reveals itself as a powerful, complex and radical work. Ms. Varda’s modesty is evidence of her mastery, just as her playful demeanor is the expression of a serious and demanding aesthetic commitment. Almost by stealth, but also with cheerful forthrightness, she communicates a rich and challenging array of feelings and ideas. As we contemplate those faces and places we are invited to reflect on the passage of time and the nature of memory, on the mutability of friendship and the durability of art, on the dignity of labor and the fate of the European working class.

Ms. Varda and JR visit a town in France’s northern coal-producing region where the mines have shut down. They call on a prosperous farmer, on factory workers and retirees, on a group of longshoremen and their wives. Without pressing a political agenda or bringing up matters of ideology or identity, they evoke a history of proud struggle and bitter defeat, a chronicle etched in the stones of the villages and the lines on the faces.

Beneath the jauntiness and good humor there is an unmistakably elegiac undertone to this film, an implicit acknowledgment of lateness and loss. The places will crumble and the faces will fade, and the commemorative power of the images that JR and Ms. Varda make will provide a small and partial compensation for this gloomy inevitability. The world and its inhabitants are protean and surprising, but also almost unbearably fragile, and you feel the pull of gravity even in the film’s most lighthearted passages.

Ms. Varda, steeped in the traditions of the avant-garde, is resistant to nostalgia — there’s always too much to notice here and now — but she finds herself drawn to retrospection. Her glance turns backward, to her own earlier work and to her relationships with colleagues and friends. She tells JR that he reminds her of Jean-Luc Godard, her erstwhile comrade in the heady, heroic days of the French new wave. Mr. Godard in his 30s favored dark glasses and an impish, enigmatic air, and he plays an intriguing off-camera role in “Faces Places.” He is muse and villain, a source of inspiration and exasperation, a secret sharer and a vengeful ghost.

He’s probably not so vain that he thinks this movie is about him. And Ms. Varda is too generous to make it all about her, even though no one else could have made it. “Faces Places” is unforgettable, not because of dramatic moments or arresting images, but because once you have seen it you want to keep it with you, like a talisman or a souvenir. Wherever you’re going, it will surely come in handy.