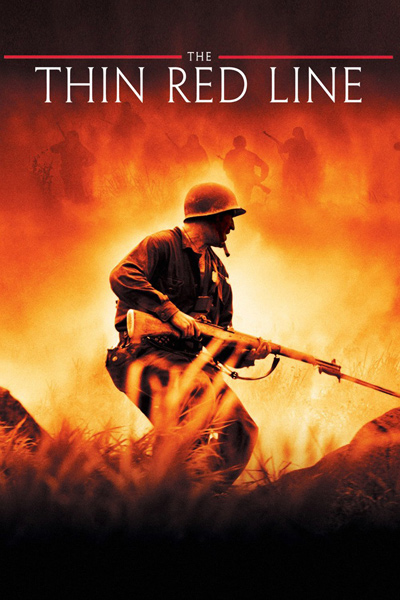 It's no contest deciding which of the year's two World War II epics — Steven Spielberg's Saving Private Ryan or Terrence Malick's The Thin Red Line — will earn 1998's Oscar for Best Picture. Ryan offers bloody D-Day heroics, adrenal stimulation and tearful sentiment, plus assurances that although war may be hell, it's also a hell of a character builder. Spielberg tells us what we want to hear. Line, adapted by director Malick from the James Jones novel about the key American victory over the Japanese at Guadalcanal, offers raw fear, combat numbness and moral uncertainty, plus assurances that war dehumanizes the men it doesn't kill. Malick tells us what we don't want to hear — an offense to Academy members, who traditionally vote for uplift.

Malick, who lives in Texas, doesn't play those Hollywood games. Maybe that's part of the reason this Harvard- and Oxford-educated recluse directed the justly acclaimed Badlands (1973) and Days of Heaven (1978) and then fell off the face of the earth — that's industryspeak for not making movies. Malick, 55, may lack Spielbergian box-office instincts, but that didn't stop the best talents from begging to work with him on The Thin Red Line. Rest assured, Malick isn't star tripping. With the exceptions of Sean Penn and Nick Nolte — who have major roles and perform them superbly — the bigger names mostly take small parts (John Cusack, Woody Harrelson) or walk-ons (John Travolta, George Clooney) as a tribute to a film artist they admire. That leaves the focus on lesser-known actors (Elias Koteas, Ben Chaplin) and relative unknowns (Jim Caviezel, Adrien Brody, Dash Mihok), all of whom deliver strikingly memorable performances.

The thing to know upfront about The Thin Red Line, aside from its status as a flawed but stunning achievement, is that it doesn't open with a bang. Where Spielberg thunders, Malick insinuates. In Ryan, soldiers land on Omaha Beach to face German mortar fire that results in gushing arteries and severed limbs. In Line, an army rifle company — C, for Charlie — hits the beach at Guadalcanal expecting mass slaughter, only to find no initial resistance from the Japanese. Yet the scene is all the more terrifying coming after so much anxious waiting. Malick also shows the devastating effect of American and Japanese invaders on this serene island, from its Melanesian inhabitants to the shelling that reduces vegetation and wildlife to dead ash.

Getting inside the heads of the soldiers presents a more daunting task. Malick employs a novelistic technique used in his first two films: interior monologues. Nolte, in top form as Lieutenant Colonel Tall, bluntly orders his men to take Hill 210, a suicide mission that will further his career at the expense of their lives. He doesn't blink, but his thoughts reflect the same turmoil and self-disgust that gnaw at the openly compassionate Capt. James Staros (Koteas). Private Doll (Mihok) learns that nobody is what he pretends to be in this man's army, including Private Bell, beautifully played by Chaplin, whose sexual fantasies about his wife (Miranda Otto) can't erase the hard fact that she has left him for another man.

Penn, as First Sergeant Walsh, struggles to maintain his shell of cynicism by riding Corporal Fife (Brody), a reformed coward, and Private Witt (Caviezel), a Kentucky-bred idealist, until they realize that virtue is meaningless in a war that defines them only as cogs in a combat machine. Walsh seeks to kill the "spark" in Witt — a spark he secretly admires — in order to save him. Penn and newcomer Caviezel, who gives a performance of shattering intensity and feeling, unlock the film's grieving heart.

As all these voices converge on the battlefield — and the battle scenes rank with the greatest ever filmed — The Thin Red Line grows steadily in power and poetic grandeur. The great cinematographer John Toll, an Oscar winner for Braveheart and Legends of the Fall, takes your breath away with scenes of delicate beauty — such as the sun following the backs of soldiers as they mount a hill — that serve as a counterpoint to the carnage ahead. Delicacy, an odd word to apply to a war film, is a Malick hallmark. Most prevalent are images of fragility, be they a bird's broken wing, a soldier's trembling blink or a splash of blood on a blade of grass. A GI caresses the back of his buddy's head in a gesture of tenderness that exalts survival over bogus flag-waving. "Property," Walsh says bitterly. "It's all about property."

The Thin Red Line isn't an easy film or a perfect one. One man's philosophical meditation on war could be another's long, hard slog. In cutting an early six-hour version by more than half, Malick has left characters and plot strands dangling. And his psychic probing of men at war sometimes results in narrative inertia. The feeling persists that the director could have used more time to shape his work. But Malick's return is a cause for celebration. His harsh, haunting film shuns the platitudes to expose war as a crime against nature. — Peter Travers, Rolling Stone