Members of Gasoline Lollipops in person 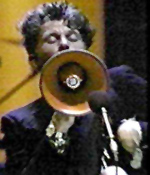 Local musicians pick a favorite film. This Tom Waits concert film is not otherwise availale in any format except out-of-print VHS tapes. The film print is being made available by a private collector.
If you are a Tom Waits fan, Big Time is a treat. Big Time encompasses a chunk of Waits' career that many fans consider seminal. While the earlier, smoother Waits sounded like a poetic, slithery lounge lizard, this Waits became more of a stomping, wheezing, snorting lunatic. Indeed, there's something exciting about the way he snakes his grumbled and screeched words in and around the stomping, pounding beats. When you can catch a few lyrics here and there, they're unfailingly brilliant bits of beautiful poetry, like "the moon left teeth marks across the sky." But Big Time is no mere concert movie. Waits is such a compelling performer, both as an actor and as a musician, he's imminently watchable no matter what he's doing. The movie's big finale is a blowout rendition of perhaps Waits' most beautiful song, "Innocent When You Dream," only he sings it in a bathtub (he dramatically parts the shower curtain at the beginning of the song and closes it again at the end). I think everyone can agree that Big Time is one hell of a show. Source: Jeffrey M. Anderson, Combustible Celluloid.