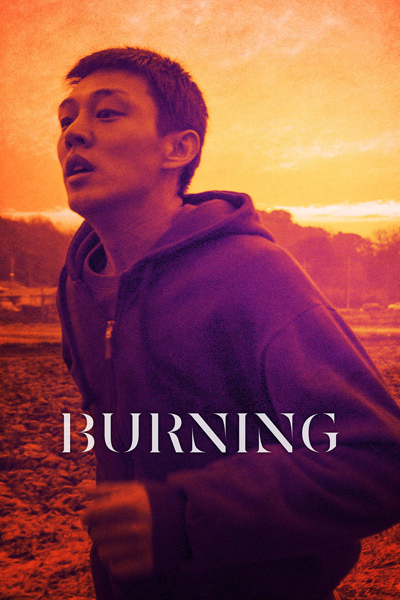 BURNING is the searing examination of an alienated young man, Jongsu (Ah-in Yoo), a frustrated introvert whose already difficult life is complicated by the appearance of two people into his orbit: first, Haemi (newcomer Jong-seo Jun), a spirited woman who offers romantic possibility, and then, Ben (Steven Yeun, THE WALKING DEAD, SORRY TO BOTHER YOU), a wealthy and sophisticated young man she returns from a trip with. When Jongsu learns of Ben’s mysterious hobby and Haemi suddenly disappears, his confusion and obsessions begin to mount, culminating in a stunning finale.

LEE CHANG-DONG (Director) LEE Chang‐dong began a career in theater in his twenties and then moved on to work as a novelist. He made his debut as a feature film director with GREEN FISH, a one-of-a-kind Korean film noir. If GREEN FISH was an exploration of genre conventions and the real world, he continued his exploration of life and the cinema with PEPPERMINT CANDY, which experiments with the concept of going back in time, and OASIS, which searches for the meaning of true love. It was with these latter two films that he bested the critical and popular success he received for GREEN FISH, achieving both domestic and international acclaim and accolades. OASIS earned LEE and lead actress MOON So‐ri awards for Best Director and Best New Actress at the Venice Film Festival. In 2002, he was appointed as Minister of Culture and Tourism. Upon being relieved from this official position, he directed his fourth feature, SECRET SUNSHINE. The superb performance of JEON Do‐yeon as the tormented Shinae in SECRET SUNSHINE earned her the Best Actress award at the Cannes Film Festival in 2007. His fifth film, POETRY won the best screenplay award at the 63rd Cannes Film Festival and won prestigious awards at various national and international film festivals. He has been paying attention to the realities of the various strata and returns with BURNING to sketch the stories of young people living in modern society.