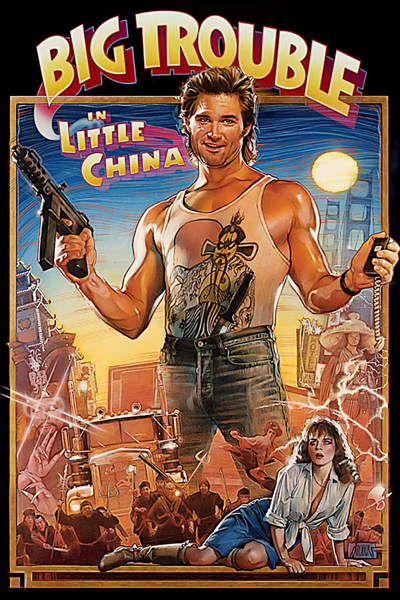 That's just not the case, though. Burton simply gets swept up in an ongoing battle for supremacy happening behind the façade of San Francisco's trademark tourist destination. "I'm a reasonable guy, but I just saw some unreasonable things," he says after witnessing an act of Chinese black magic that defies Western rationale. Juxtaposing perception and reality through cultural tradition and mainstream ignorance is just one of the film's many virtues.

Carpenter and Russell had worked together on two masterpieces before, the great horror remake The Thing and scathing social critique/survival yarn Escape From New York . But Big Trouble in Little China deconstructs Russell's role as a leading man, turning him into comic relief in service of an Asian-American badass named Wang (Dennis Dun).

Carpenter's trademark style is still present, including the moody synthesizer score that complements the film's crisp pacing and slaphappy action. Yet Big Trouble in Little China 's irreverent and schizoid nature stands out in relation to the director's other work. Violence is both silly and gruesome; an early sequence involving a gnarly street fight gives the opening of Gangs of New York a run for its money.

Thematically, history is respected but the conventions of standard narrative storytelling are thrown to the wind.

All of this contradiction makes for a startlingly joyous revisionist Western that, as one wise man says, "can shake the pillars of heaven." Review by Glenn Heath Jr.