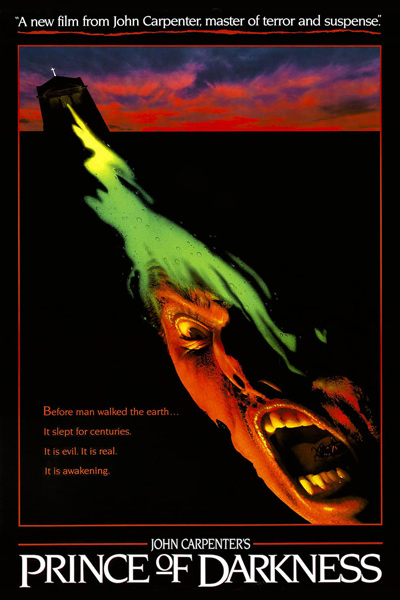 Film 3003: The Cinema of John Carpenter with introductions by Professor Sabrina Negri of C.U.'s Cinema Studies.
Maybe the director’s most underrated film, Prince of Darkness fashions something original from the hoary satanic panic setup. Carpenter’s go-to harbinger, Donald Pleasance, is the priest who summons a troupe of academics to monitor a giant canister of swirling green matter in the basement of a derelict Los Angeles church. The novelty is the scientific subtext with which Carpenter, writing as “Martin Quatermass”, infuses the story; the film occasionally gets bogged down raving about quantum physics and the uncertainty principle, but it all largely adds an intriguing alien sheen. It’s impressive how much Carpenter produces from so little: the absences and reappearances in the church’s hallways of another trademark ensemble; a creepy astral transmission unsurpassed until Ringu; Alice Cooper; a couple of mirrors. Close to a decade’s experience in horror pays off, with Carpenter working the audience with jump-scares and revolting demises like an old pro. But the true achievement is a sense of ecstatic entropy and corruption that seeps out of every pore. — Phil Hoad, The Guardian