Tito and the Birds 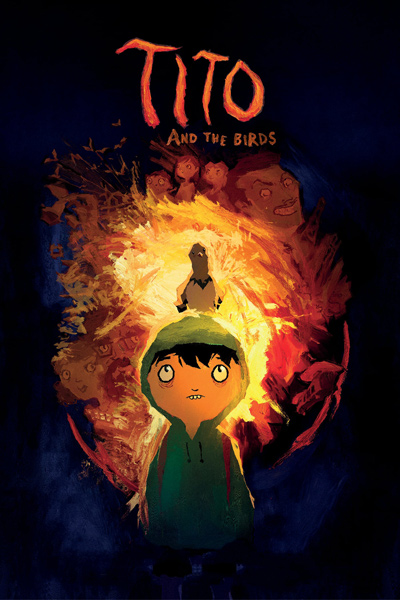 In a society gripped by growing mistrust and paranoia, we are well advised to heed the wisdom of our feathered friends. That’s the gist of “Tito and the Birds,” an appealing Brazilian animated feature, and it’s conveyed in a handsome, expressive style that’s pleasing to watch.

The problem, says the film, is that while in earlier days the human race was in much closer touch with avians and knew their language, we have now forgotten it. The movie’s hero, 10-year-old Tito (voice of Pablo Henriques), is on a mission to fix that. It’s an uphill battle because, where the boy lives, things are not going well at all.

The animation style makes frequent use of colorful backgrounds painted in oils, with Expressionist emphasis on brushstrokes. There’s a human quality to these visuals, which are pointedly not striving for perfection, but revel instead in supposed defects like smudges, jittery lines, color blotches and distorted proportions.

It’s a nice choice to illustrate what filmmakers Gabriel Bitar, André Catoto and Gustavo Steinberg have in mind, to suggest an innovative and uplifting remedy for dark political times. In Tito’s world, the citizenry is in thrall to an authoritarian whose televised rants aim to cow his listeners with allegations that, for instance, a terrifying crime wave is sweeping the nation.

This fearmongering has a potent effect — an infection of social paralysis in which the victims are gradually reduced to petrified lumps, resembling slightly humanized potatoes.

Tito profits from the hard experiences of his absent dad, an eccentric scientist who years earlier tried to build a machine to translate bird language. An explosion that injured Tito resulted in the father’s banishment, leaving the boy to be raised by an overprotective mother (Denise Fraga).

With the help of  his young pals — brave Sarah (Marina Serretiello), Buiú (Vinicius Garcia) and Teo (Enrico Cardoso) — Tito sets out to re-create the machine, a tricky proposition, and liberate a populace that by now is afraid of everything.

Viewers of all ages can savor the film’s look, which remains vibrant and engaging despite some intentional ugliness and the frequently dark themes. Adults will find the political allegory amusing and timely. Younger viewers may not get that part of the movie but will surely respond to its message about the calamitous effects of fear and the importance of conquering it.

They could also get a kick out of a story in which the saviors of the world are preteens.

Tito and the Birds