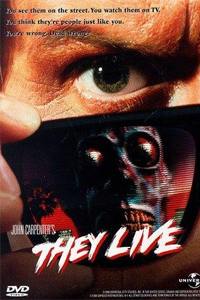 Film 3003: The Cinema of John Carpenter with introductions by Professor Sabrina Negri of C.U.'s Cinema Studies.
If one of Carpenter’s back catalogue was crying out for a remake, it isn’t Halloween but rather They Live (★★★★☆). The film was was responding to the start of the US rust belt and Reagan-era consumerism, but its themes of working-class subjugation and omnipresent media control have only become more pressing. The allegory is framed in fabulously lurid B-movie terms: drifter Nada stumbles on a pair of shades that allow him to see that Earth has been infiltrated by Día de Muertos-faced aliens intent on milking humankind. Played by WWF wrestler Roddy Piper, Nada is deliberately stuck in the cornball idiom of the 80s action hero, with one-liners to match: “Brother, life’s a bitch … and she’s back in heat.” Carpenter’s own ornery attitude to the thankless task of the revolution is summed up in the sequence where, trying to get his partner to don the glasses, Nada street-brawls him for six straight minutes. The Fight Club of the 1980s. — Phil Hoad, The Guardian