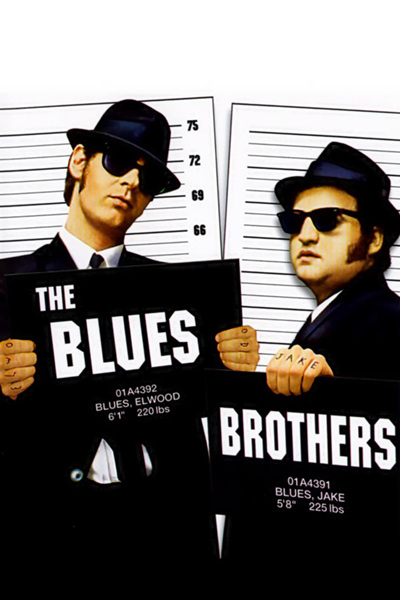 The Blues Brothers was way ahead of its time. Part slam-bang musical, part offbeat comedy, part chase picture and part road comedy, The Blues Brothers is an immensely enjoyable, truly original film that plays almost like a concert experience brought to the big screen. There are several wonderful cameos from musical blues legends including Ray Charles, James Brown and Aretha Franklin, among others, and the film spotlights two of SNL's most enigmatic players, Dan Aykroyd and the late, great John Belushi.

It's hard to imagine The Blues Brothers as a Saturday Night Live movie, but it is (the second most successful, just behind Wayne's World). And in many ways it's the best film of the bunch, filled with timeless comedy, a fun story and interesting characters that grow far more intriguing as the narrative progresses. The film does play a bit offbeat, but its irreverent style lends to the film's amusing quirkiness.

Even stranger is director John Landis' track record. After tickling our funny bone with the hilarious cult comedies Kentucky Fried Movie and Schlock (if you haven't seen either film, see them), he went on to make Animal House, The Blues Brothers and American Werewolf in London – all in a row. Impressive. Sadly, outside of the '80s, the rest of Landis' career is a little more spotty.

But Landis was at the top of his game with this comedy/musical hybrid. The film, while incredibly overlong (even more so in the extended cut), is surprisingly well paced, with plenty of gags as well as some long-winded, but fun, musical numbers, some of which may drag the film down for folks not in love with the blues.

The Blues Brothers will always stand as one of the great comedies of the early '80s. It never ceases to be funny, and it's filled with love, spirit, awesome action sequences (the chase in the mall is particularly impressive), memorable moments and great music.

The Blues Brothers sings its way to Blu-ray complete with two cuts of the film – the 133-minute theatrical cut and the extended 148-minute cut. If you're a diehard fan, you'll want to check out the extended cut. It's a bit meandering, but enjoyable nonetheless. Sadly, this disc skips out on a DVD copy or Digital Copy of the film. Including the film's less-adored sequel, Blues Brothers 2000 would have been a neat addition as well.

Other extras include three featurettes previously found on the original DVD. There's an hour-long look at the making of the film, another retrospective that runs just 15 minutes, and a look at comedian John Belushi. While this featurette is billed as the "ultimate portrait" of the late actor, the 10-minute running time doesn't quite do the man's legacy much justice. The disc also includes the usual BD exclusives, from BD-Live connectivity, the Ticker and pocketBlu. As an added bonus, the disc is D-Box enabled.

Even better, this Blu-ray release features a fresh, remastered 1080p/AVC transfer approved by director John Landis. I've never been blown away by any transfer this film has received. The Blues Brothers has always had sort of a junky look to it. It's unrefined, gritty and, well, filled with the blues. But that's kinda the film's charm. So how does Blues fare on Blu? Well, pretty damn great. The film still retains its gritty charm and soft, sometimes hazy images, but this is easily the sharpest, cleanest, brightest version of this film out there. It's bold, filled with detail and texture. And it's occasionally quite striking, especially close-ups. The encode is spotless, too, with nary a compression artifact or distortion in sight.

But there's a catch, and it's a big one. The extended cut features nearly 18 minutes of bonus footage, and from the looks of it, this footage was not nearly as polished as the rest of the film. The disc warns audiences of the this fault, but does little explain the situation. I'm guessing there was some sort of problem with the stock. Or perhaps someone else cleaned this footage up. Or it's even possible this footage was upconverted from the original DVD master. I have no idea. Regardless, the result is an overcooked, ugly palette with heavy blown-out contrast and an ugly green tinge that plagues every moment. So, quite sadly, be prepared to notice when the film switches between the theatrical footage and extended footage.

Audio is presented in 5.1 DTS-HD Master Audio and it's an uproarious listening experience surprisingly rich with atmosphere, crisp dialogue and thumping bass. The musical numbers are absolutely delightful, with impressive, organically mixed surround cues and clean, energetic front audio. However, yet again, the extended cut isn't quite as clean. Dialogue succumbs to a few high-end crackles and distortions in this deleted footage. This is either some sort of upconversion or the best this footage can look and sound.