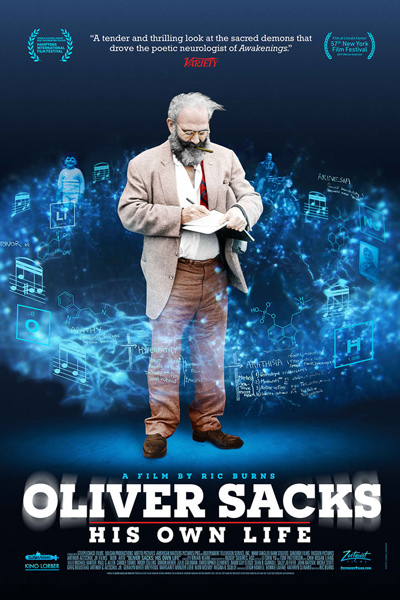 The title of the new documentary “Oliver Sacks: His Own Life” bounces off the title of the essay that Sacks published in The New York Times on Feb. 19, 2015 (“My Own Life”), days after he’d received a diagnosis of terminal cancer. (He died on Aug. 30, 2015.) It‘s a deceptively plain title. For Sacks, in his impish way, was suggesting that his own life, if you looked at it closely enough, might bear more than a passing resemblance to the idiosyncratic and richly freakish lives he chronicled in his case-study portraits that were really a form of wide-eyed literary biography.

Sacks wrote about people in extreme states — of sensory and neurological damage, of awareness and sheer being. And “Oliver Sacks: His Own Life,” directed by the redoubtable Ric Burns (“Andy Warhol: A Documentary Film”), is a portrait at once tender and thrilling, a movie that presents us with a man who led an eccentrically defiant, at times reckless existence that was the furthest thing from cunningly planned. He was a wanderer in the body of a clinician, like Jack Kerouac crossed with Jonas Salk. He was that rare if not unique thing, a scientific navigator of the soul.

A great many people, of course, know Oliver Sacks from the 1990 Penny Marshall film “Awakenings,” in which Robin Williams, looking (if not acting) remarkably like him, played Sacks during the time he spent in the late ’60s at Beth Abraham Hospital in the Bronx, where he encountered catatonic patients who had been victims of the 1920s epidemic of encephalitis lethargica. They appeared to have little or no consciousness, but Sacks, treating them with the then-novel dopamine replacement agent L-DOPA, woke them up, revealing their still highly active states of experience. The experiment had a Lazarus-like dimension: He took humans who’d been wasting away for decades and returned them to the world (at least for a while). The Hollywood version played up the feel-good mystical-healer vibes, laying a sentimental coating on the whole thing, but it still caught Sacks’ audacity — the way he shot beyond the limits of medicine because he simply didn’t see them. What he saw, like a beacon, were the inner lives of his patients.

You’d think a psychoanalytical neurologist with that kind of humanity and fortitude would be a relatively centered person, one with a rock-solid sense of boundaries. Far from it. At the time of the “Awakenings” experience, Sacks was emerging from his own slow-motion semi-catastrophe, a period of liberation that was also one of staggering self-destruction. Born in England in 1933, he’d come to the U.S., like so many others, searching for a kind of freedom; in his case, he was thirsting to throw off the oppression he felt from a mother who didn’t accept his homosexuality. Arriving in San Francisco in 1966, Sacks became a motorcycle-riding bodybuilder in black leather, an image caught on the cover photo of his 2015 memoir, where he looked like a Tom of Finland stud.

He worked out to the point that he could bench-press 660 pounds, setting a California weight-lifting record. But he also plunged into an addiction to amphetamines, swallowing them in handfuls that would have killed a man with lesser bulk. High as a kite, he would jump on his motorcycle and cruise into the night, driving hundreds of miles at top speed. Making his hospital rounds, he was incorrigible, a loose-cannon empath with little patience for protocol. On one New Year’s Eve, he realized that he’d never make it to the next one unless he ditched the amphetamines. He found a psychiatrist, one he continued to see for the next 50 years, and when Oliver asked if he was schizophrenic like his brother Michael, the shrink said no. Then Oliver asked if he was merely neurotic. The shrink said no.

Oliver never asked again, and part of the teasing mystery of “Oliver Sacks: His Own Life” is that the movie, like Sacks himself, refuses to pin its subject down to anything as earthly as a diagnosis, because that would reduce him. He had enough torment about his sexuality that, after trying and failing to find a partner (he feared that he was compulsively drawn to straight men), he became celibate for 35 years. He replaced amphetamines — and maybe sex — with writing, and though “Awakenings,” his first book, published in 1973, was not a resounding success (it didn’t sell well, and was rejected by the neurological establishment), it launched Sacks’ singular gift for looking at what most of us would view as a disability and glimpsing, inside it, a state of grace.

He spent a decade writing a poetic book about his own leg injury. And he saw the afflictions of others as windows. Were the tics and whirling-dervish psychic energy of Tourette Syndrome a violation of a personality — or, in fact, the fulfillment of it? Had the Man who Mistook his Wife for a Hat taken leave of his senses, or was he living on a different plane of reality? Sacks’ scientifically wired empathy, his ability to capture the fiber of another’s experience to the point where it became transcendent, was a gift that descended from his own sacred demons.

Burns assembles a fair amount of archival footage, so we can see how Sacks evolved, over time, from bodybuilder to the burly bearded medical holy man he became. But Burns didn’t start filming until after Sacks received his cancer diagnosis and was given a likely six months to live. Much of the film was shot in the living room of Sacks’ Greenwich Village apartment, where the invisibly ailing and, at 81, still ebullient Oliver holds court, sitting among his friends, publishers, and associates. His accent and tone of voice are singular, as he turns stories and confessions — like a hilarious one about a midnight erection and some Jell-O — into a melodious one-world British-Jewish form of verbal play. He found a partner, Billy Hayes, late in life, but what’s most moving about “Oliver Sacks: His Own Life” is that Sacks, whose extreme love of existence was there in every sentence he wrote, could embrace death because it would be the most out-there adventure of his life. What he saw is that we were all, in our ways, afflicted and all unique. And therefore all extraordinary.