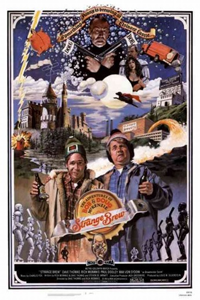 Join us Thursday, June 29th at 7pm in CU's Chem 140, located north of the UMC, for a special 35mm screening of the 1983 comedy Strange Brew, loosely based on Shakespeare's Hamlet, starring Rick Moranis and Dave Thomas.

This event will commemorate the retirement of Senior Technical Director, John Templeton, who has been providing his unparalleled expertise to the University for almost half a century. Strange Brew is one of J.T.'s favorite films (he'll be projecting it), and special guests will be in attendance.

Admission is pay-as-you-can, with $10-$20 donations encouraged, for fundraising purposes to support the International Film Series, Boulder's longest running venue for eclectic and art-house films, on which John has had a profound and direct influence.

Before Saturday Night Live spewed forth a feature length film based on every skit character ever created, SCTV gave birth to Dave Thomas and Rick Moranis' Canadian drinkers Bob and Doug McKenzie. These may very well have been the most popular characters from that TV sketch show, and dare I say the most interesting people to come OUT of Canada? No! Wait, I'm kidding! No hate mail from Canadians, please! Anyhow, in 1983 Thomas and Moranis co-wrote and co-directed the adventure of Doug and Bob McKenzie in the now-legendary cult classic Strange Brew!

Bob and Doug McKenzie hit the big screen in their very first movie, Strange Brew! Our beer lovin', hockey playin' Canadian friends are about to do battle with the evil Smith (Max Von Sydow, Needful Things), a dastardly brewmeister who is plotting to take over world one beer drinker at a time! When Bob and Doug head over to the Elsinore beer factory to get free suds by stuffing a mouse in a beer bottle and passing it off as contaminated, they inadvertently wind up with new jobs! The factory is owned by the deceased founder's daughter, Pam Elsinore (Lynn Griffin, TV's Stephen King's Storm of the Century), and she smells a rat: Brewmeister Smith! As Bob and Doug dig deep into the factory's history (i.e., bumble their way around the building), they find a world domination plot so devious that only the wily charms and wit of these two unlikely heroes can stop it!

Okay, eh, so here's the deal with this movie: see, it's funny, okay, but it's also really goofy and, like, silly. I think I totally understand why this movie is so popular, you know? I don't know any other film that has tried to incorporate stuffing a mouse in a bottle to get free beer, Max Von Sydow as an arch nemesis, and Mel Blanc's voice as the main character's father's voice. It's all like very exciting, ya know? In fact, I may even go out on a limb and say that it may be more exciting than jelly donuts and beer. Okay, so maybe I'm being a knob--nothing's better than beer, right eh?