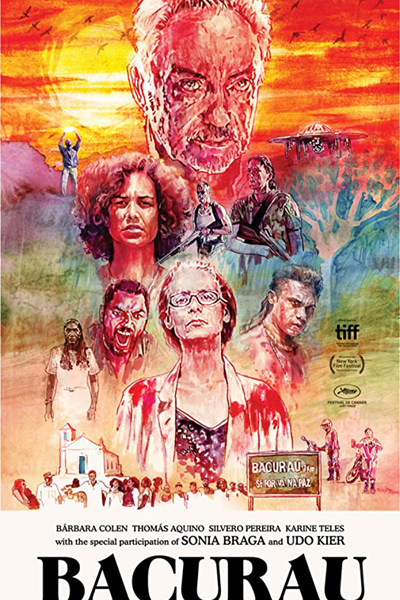 Support the IFS by screening titles straight from independent distributors who routinely provide us with interesting movies. By clicking "watch now" below you'll be able to watch a theatrical release and the distributor will then split the proceeds 50/50 with the IFS, which in turn helps buy us time while we wait for the green light to return to Muenzinger Auditorium.
Set in the near future, the film follows Teresa (Bárbara Colen), who comes home to Bacurau, a fictional village in Brazil's semi-arid sertão, to attend her grandmother's funeral. Upon her arrival, Teresa immediately observes signs that Bacurau is in dire straits. Basic amenities are in short supply, mobile-phone coverage is fading, clean water supply is dammed and the truck that brings potable water arrives riddled with bullet holes. It soon becomes apparent that the corrupt government has forsaken the village completely: not only has Bacurau been literally erased from the map, but its citizens are under attack. As the responsible close in, the villagers must prepare an organized resistance to avoid greater damage.