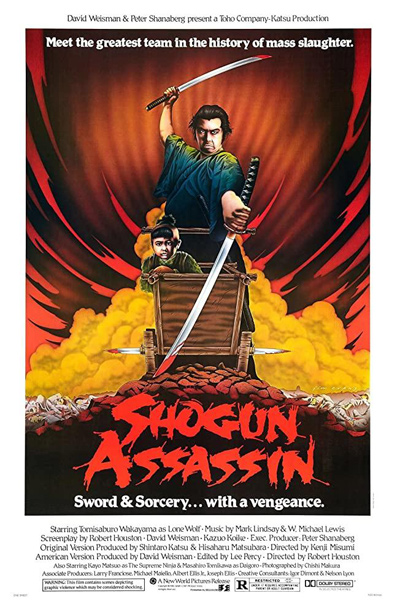 This Sunday, May 24th at 9:15pm EST (ADDED: encore show May 30th at 3:00 PM EST), we will be live streaming "Shogun Assassin" on 36cinema.com. RZA—acclaimed rapper, producer, director and co-founder of 36 Chambers—and Dan Halsted—head programmer at the Hollywood Theatre—will provide live commentary during this special Memorial Day Weekend presentation. Their collective knowledge and personal stories related to "Shogun Assassin" will give viewers a deeper appreciation for the movies we love.

"Shogun Assassin" is well known within the hip hop community as it was heavily sampled in GZA's platinum album "Liquid Swords." The album is considered one of the best albums in hip hop history on account of GZA's complex lyricism and RZA's dark atmospheric production.

Doors open at 8:15pm EST with the movie starting at 9:15pm EST. Customers will receive a link to the live stream 1 hour prior to showtime. Shogun Assassin has a runtime of 90 minutes.

This movie is Rated R. We advise no one under 17 to watch this presentation without an accompanying parent or guardian. Additionally, if demand matches our prior showing, we will cut off sales prior to showtime to ensure ticket purchasers have the best streaming experience possible. We are still in the process of scaling our technology and can only handle a certain number of users.

"Shogun Assassin" (1980) The story of Lone Wolf and Cub! Tomisaburo Wakayama stars as Lone Wolf, “the greatest samurai in the empire”. When he is betrayed and his wife murdered by the shogun’s ninjas, he takes his young son on "the road to hell" and seeks out vengeance. Roaming the countryside, they face off with countless ninjas and assassins, and are ultimately led to a confrontation with the Masters of Death, three of the fiercest killers in the history of cinema. This movie is action-packed, with blood geyser arterial showers at every turn. As the tagline states: "Meet the greatest team in the history of mass slaughter!"

Special thanks to both The Hollywood Theatre and Janus Films. Bringing this film to 36 Cinema would not have been possible without their help. We look forward to you joining us for this first-of-its-kind experience this Sunday.