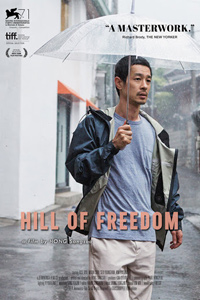 Support the IFS by screening titles straight from independent distributors who routinely provide us with interesting movies. By clicking "watch now" below you'll be able to watch a theatrical release and the distributor will then split the proceeds 50/50 with the IFS, which in turn helps buy us time while we wait for the green light to return to Muenzinger Auditorium.
Kwon (Seo Younghwa) returns to Seoul from a restorative stay in the mountains.She is given a packet of letters left by Mori (Ryo Kase, Like Someone in Love, Lettersfrom Iwo Jima, Silence), who has come back from Japan to propose to her. As shewalks down a flight of stairs, Kwon drops and scatters the letters, all of which areundated. When she reads them, she has to make sense of the chronology... and somust we. Shot in the narrow alleys, petite cafes and beautiful hanok inns of Seoul’shistoric Jong-ro district, a favorite Hong location, Hill of Freedom is a masterful,alternately funny and haunting, tale of love and longing from the great director.