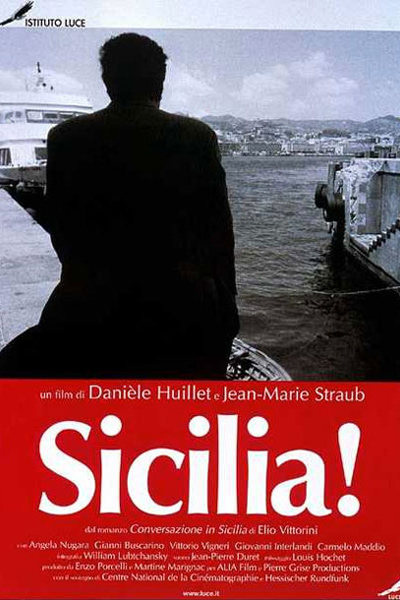 Support the IFS by screening titles straight from independent distributors who routinely provide us with interesting movies. By clicking "watch now" below you'll be able to watch a theatrical release and the distributor will then split the proceeds 50/50 with the IFS, which in turn helps buy us time while we wait for the green light to return to Muenzinger Auditorium.
Something as simple as a herring roasting on a hearth, or a meal of bread, wine and winter melon, takes on the humble aura of a Caravaggio painting in this masterful film from legendary filmmakers Jean-Marie Straub and Daniele Huillet. Sicilia! is a tragicomedy involving an orange peddler, an Italian recently returned from America, two “stinky” police officers, a guilt-stricken landowner, a traveling knife sharpener and, perhaps most unforgettably, an indomitable peasant mother who reminisces about meals of snails and wild chicory, her husband’s philandering and cowardice, and her own father’s belief in an honest day’s labor, socialism, and St. Joseph.