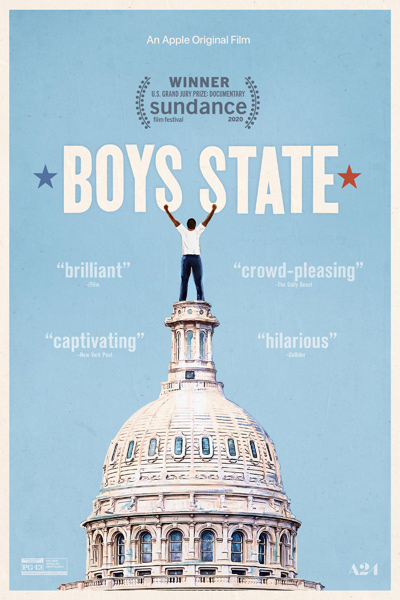 This free event will stream at 7:00 PM on Thursday, September 24. In order to access the stream, you must RSVP at A24films.com

Check out our podcast episode from September 21, 2020 about this movie

The sensational winner of the Grand Jury Prize for documentary at this year's Sundance Film Festival is a wildly entertaining and continually revealing immersion into a week-long annual program in which a thousand Texas high school seniors gather for an elaborate mock exercise: building their own state government. Filmmakers Jesse Moss and Amanda McBaine closely track the escalating tensions that arise within a particularly riveting gubernatorial race, training their cameras on unforgettable teenagers like Ben, a Reagan-loving arch-conservative who brims with confidence despite personal setbacks, and Steven, a progressive-minded child of Mexican immigrants who stands by his convictions amidst the sea of red. In the process, they have created a complex portrait of contemporary American masculinity, as well as a microcosm of our often dispiriting national political divisions that nevertheless manages to plant seeds of hope. An Apple and A24 release.